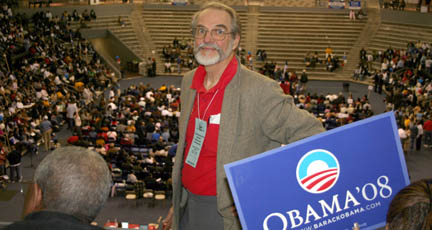 It is 3/29/08, 10:11 PM. There are about 150 people still at the23rd Senatorial District Convention of the Democratic Party of Texas. People go in and out to fast food joints, as all the concessions are closed. They aren't selling T-shirts any more, not even "I survived the 2rd Senatorial" shirts.

I have been here over 14 hours at the Ellis Davis Field House, 9191 S Polk in Dallas. This is the first time I have been settled enough to jot down my notes.

Senator West was elected to chair the convention.

None of the old routines and timetables applied. At one point, the chair asked all first-time delegates to rise. It was dramatic. Almost everybody stood up, probably 4,500 of around 5,000 people! Everybody in my delegation but me rose. One reason it was cool was that, earlier, I had a brief encounter with a Clinton supporter who pooh-poohed my argument that Obama should be supported because he helped get so many new people involved. She rose to her feet along with the other first-timers.

Many had been late in finding out that the 23rd (and all the Dallas conventions) could not be held in the usual place, Carter High School, because there were too many participants.

Not counting the many alternates who attended, the Credentials Committee reported that there were 2,690 delegates present. This was after the first caucus "sign in". 2,215 of them, 82%, had signed in as Obama supporters. 18% were for Clinton, only 475 people. That was announced 13 hours and 18 minutes after the delegates first began registering.

Finding larger arenas for conventions was very expensive for the Dallas Democratic Party. I heard they paid $40,000 for our athletic auditorium. Senator West called for a cash collection, which he later announced to net $6,773.07. Nearly all of it, it seemed to me, was in $1 bills.

When the precinct caucuses were finally called, around 9:30 PM, Senator West gave the caucuses 15 minutes to perform 1 round of nominations and one signel vote. Nearly all of them made the deadline, but precinct 3302 provided an educational example of unpreparedness. A large precinct, they qualified for 4 delegates and 4 alternates, based on the vote in the latest Governor's race. 41 Obama delegates faced only 7 "Clintonistas." By having each Obama candidate get 8 Obama votes, the precinct could have been assured of all four delegates and 3 of the alternates, while Mrs Clinton would have won only 1 alternate.

Instead, they argued. After more than 45 minutes, the convention chair had to rule that they were finished and had to turn in their list. They reported 3 Obama delegates, 1 Clinton delegate, and 4 Obama alternates. They hadn't prepared in advance, as all the Obama captains had been asked to do.

The Clinton group from 3302, nearly all Anglos, enjoyed their victory for the rest of the convention.

UAW 848 had at least 3 members in the convention. Jay Dunn, Gene Lantz, and Dianne White were each elected delegates from their respective precincts.

In 4435 precinct, where I chaired, everything was done in a timely way. By the time the precinct caucus took place, at least 5 people had left. Five Clinton delegates faced 8 Obama delegates. Each group very wisely nominated only 1 candidate and the outcome was completely predictable. I was elected Obama delegate and Vickie Keene was elected alternate for the state convention in Austin on June 5-7.

At 22:35, only 50-60 remain in waiting for the nominating committee's report. 375 delegates will come from the 23rd. About 72 will be at-large. Hundreds, maybe even a thousand, had applied. It might have been faster had they announced, much earlier than they did, that the delegates to Austin have to pay all their own expenses. I suggested it to Larry Duncan early in the convention, but they didn't do it until around 10 PM.

Emcee Ken Mohlberg told me that the 23rd is traditionally the 3rd largest district in Texas. The 14th in Austin will probably still be the largest, but we might beat the 13th in Houston this year, because Democrats are "up," having won nearly all county offices in 2006.

He gave no credence to the rumor that the Clinton campaign had deliberately targeted the 23rd because of the generally lower incomes of its voters. He said that the long delay in the Credentials Committee came from an unavoidable influx of new people, who had not filled out and turned in their forms properly. Thus the committee used hours and hours to validate the delegates. Later on, I found a list of around 20 precincts that were ordered to report directly to Credentials rather than just signing in regularly. 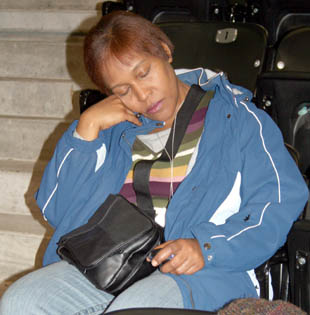 A lot of people keep dozing off.

11:21 Larry Duncan thinks that at-large delegates will find out by mail before anything will be posted on the web. The Computer geeks, he said, are exhausted.

A most curious little grey man is gathering litter from the aluminum and concrete benches behind the podium. He is grey and small, but stands surprisingly straight when not stooping to grab up the bottles and scraps of paper littered everywhere. He wears a good-fitting blue suit and, on one foot, an attractive blue sock under a natty black loafer. On the other foot is a white sock and a multi-colored athletic shoe. He provided such a fine example that several other older people began collecting trash for his bag.