How Does a Union Prepare for Trouble?

United Aerospace Workers Local 848, whose major contract with Vought Aerospace expires at the end of September, is providing a good local example of how a serious union prepares for possible problems ahead. President James Splawn and Chairman Chuck Stanley have been setting up planning sessions. At local union meetings they carefully explain the stakes in the contract negotiations, the possibilities of what might happen, and ways that members and supporters can get ready.

Union officers are careful to explain that unions do not want to strike and never do unless they are forced by company management. Nevertheless, union wisdom says that the local union that is best prepared for trouble is the local union that is least likely to suffer it. Consequently, the union leaders intend to do everything possible by way of preparation.

On August 9, the local took an unusual step by scheduling its usual monthly retiree meeting at 5:30 in the evening rather than at 11 in the morning. The retiree 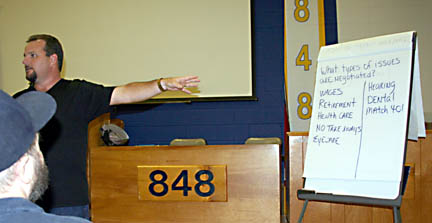 luncheon is a fixture in UAW locals. However, the evening meeting made it possible, for the first time, to invite active members and their families. Turnout was larger than is usual at luncheons. President Splawn stayed late and went to a great deal of trouble to explain every aspect of the process to the group. When he finished, it was noted that retirees and members' families had never been so included!