The Dallas Central Labor Council held its first 2009 meeting on the third Thursday, January 15. It was Dr. Martin Luther King's birthday, and unionists were pleased to hear, in the Jobs with Justice report, that the Teamsters in Ft Worth had won a fight that was very similar to the last battle that Dr King fought when he helped sanitation workers in Memphis. Teamsters Local 767 had just reported a thumping 2-to-1 victory over Allied Waste management's attempt to decertify the union!

The union leaders were also pleased to note that Congresswoman Eddie Bernice Johnson had signed on to the Employee Free Choice Act. Grateful Texans are calling her Washington office at 1-202-225-8885 to thank her. The bill, which would make it easier to organize new unions and get first contracts, is labor's number one legislative priority at the federal level. At the state level, top union leaders are signing up in record numbers for the Texas AFL-CIO legislative conference in Austin on January 27-28.

Texans, who hoped to see a legislature that was less polarized after the former Speaker of the House, Tom Craddick was overthrown, were shocked on the first day of the session when Lieutenant Governor David Dewhurst led a move to suspend the time-honored voting traditions and ram a "voter-ID" bill through. The bill runs counter to American history, which has tended to allow more people to vote, by putting new restrictions on the democratic right of Texans to vote.

The various unions affiliated with the Dallas AFL-CIO caucused to select their Executive Board members. They also began the process of electing the Financial Secretary Treasurer (the only full-time officer), the President, Vice President, and Sergeant at Arms.

Above, new delegates are sworn in

Below, Gwen Dunivent (left) was nominated to replace her good friend, Nancy Hall, as President of the Dallas Council 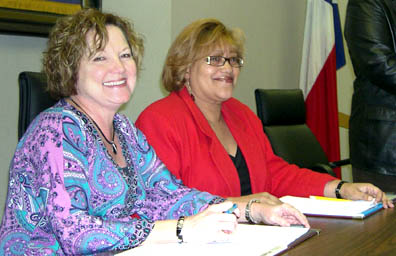