The National Nurses Organizing Committee attended their first meeting as members of the Dallas County Central Labor Council on November 15, 2007. Their organization was already affiliated with the AFL-CIO at the state and national levels. North Texas Jobs with Justice did our best to make the nurses welcome in the union movement. We bought 12 big pizzas to feed everybody, and we used our monthly report to briefly explain why it is vital that Texas unions embrace organized health care workers: because we will never achieve health care reform any other way!

After the meeting, a number of union leaders introduced themselves to the four nurses and one organizer in attendance. They were exploring ways that they could help one another. It is likely that the nurses were impressed to see how the Central Labor Council helps the affiliated unions. They heard a good report from the United Way Liaison, Charles Whitaker, and got a thorough update on the local political situation.

Just in case they weren't already thoroughly impressed, two major candidates for office in 2008 visited the council to ask for labor's help. 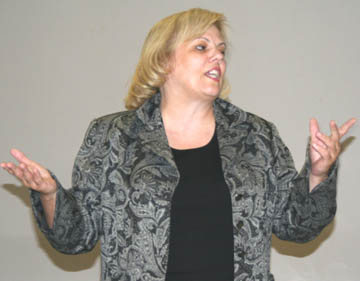 Judge Susan Criss is a candidate for the Texas Supreme Court. She went over some of the revelations that have made the entire state ashamed of their judiciary in recent years. 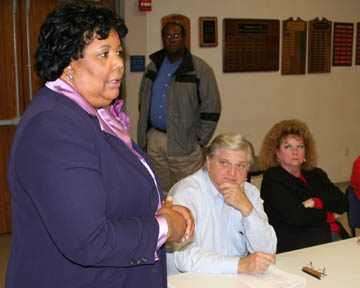 State Representative Yvonne Davis, one of the favorites of Texas working people, asked the union leaders to take the upcoming 2008 elections very seriously.

Several of the union leaders urged people to help get out the union vote in State Representative District 97, where a runoff election is expected to be held around December 11. There were 7 or 8 candidates in the first round, and the one who got the most was named Dan Barrett. He has been asking North Texas union leaders for help in the runoff.