State Representative Roberto Alonzo held a friendly fund-raiser at "Luna de Noche" restaurant in Dallas' Victory Park on October 4. The popular lawmaker hosted a number of union leaders. In addition to the teachers' union, some of whom are pictured, Alonzo's circle of good friends included J.R. Flores, president of UAW Local 276 at General Motors in Arlington. Flores is also President of Dallas Labor Council for Latin American Advancement (LCLAA). Other UAW members were in the audience as well. 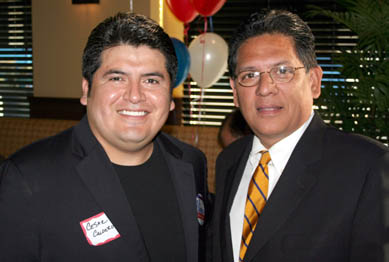 Cesar Calderon from the Baker's union made new friends and political contacts at Alonzo's party.

It was a good place for serious-minded union people to be, because Roberto Alonzo is very popular with political leaders from all over the state. Many of them attended the October 4 event.