Activists come Together at JwJ Breakfast 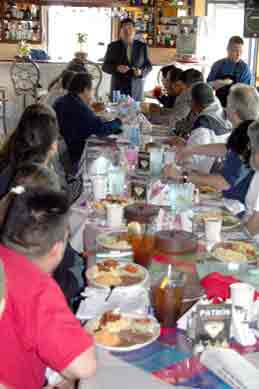 Roberto Alonzo began his presentation by asking people to state the organizations that they belong to. Virtually every progressive group and trend were represented. It was especially noteworthy that Johnny Rodriguez, President of United Food and Commercial Workers Local 540 and Vice-President of National LCLAA, brought his entire staff. Rodriguez also made sure that nobody had to pay for their own meal!

Since it was formed in 1990, North Texas Jobs with Justice has brought church, community, and civil rights groups together with the labor movement to solve workers' problems. No other organization serves this function in North Texas, and none could do it so well.

After Alonzo completed his presentation about Cesar Chavez, he went on to discuss recent events and the challenges that continue evolving. Other activities are presented on this site as they come up. The Jobs with Justice activists made sure that everybody knew about labor's number one legislative priority, the Employee Free Choice Act. The Act has passed the House of Representatives but is expected to have a hard time in the Senate. Almost all of the breakfast participants signed petitions to Senator Cornyn. A number of them also signed the traditional "I'll be there" sign-up card for Jobs with Justice.

The event went on from 8:30 until 11 AM, but several activists left early in order to attend the Cesar Chavez rally and parade taking place in Ft Worth that morning. We aren't just a talking organization! 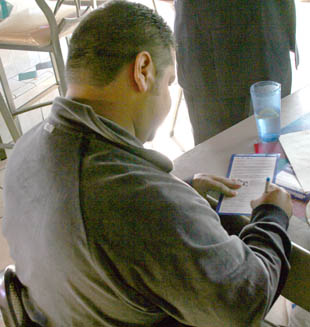 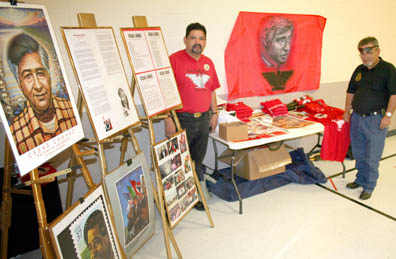 Gerardo Contreras set up an outstanding Cesar Chavez display at the breakfast, then again during Ft Worth festivities