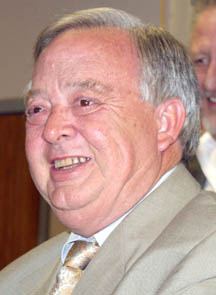 The Dallas Central Labor Council meet on the third Thursday, March 15, to conduct labor's business and work on ways to pull together. The national AFL-CIO has designated Brother Don Slaiman to work in our area to develop support for the Employee Free Choice Act. The Act would make it possible for everybody who wants a union to get one.

The situation in state government was explained by Texas AFL-CIO President Emmett Sheppard (pictured). He said that things were "thankfully slow" in Austin this legislative session. Delegates are eager to get to work on the local elections coming up May 12, but only a few endorsements were made: Angela Hunt, Pauline Medrano, and Steve Salazar for Dallas City Council. More endorsements are expected after the April meeting.

Most of the Council's new officers were sworn in. Trustees will be selected by the new leadership in April. Outgoing President James Whitehead was honored

before he handed over the gavel to Nancy Hall of CWA Local 6215 (pictured). Sister Gwen Dunnivent of the Southwest Airlines Flight Attendants' union, TWU556, introduced her local union president, Thom McDaniel of Houston, and other luminaries associated with their 9,000-strong union. They had come to see Dunnnivent sworn in as Vice-President of the Council. UAW leaders, including political rep Danny Trully, were out to see their man, Gerardo Contreras, sworn in as Sergeant at Arms.

Volunteers will screen high school seniors who are applying for Texas AFL-CIO scholarships. Dallas recommendations will then be considered in Austin.

Sister Judy Bryant reported that the Allied Federation of Teachers had lobbied the state capitol 1000 strong, with 175 of them from North Texas. There are a number of bills in Austin that would undermine our treasured school system, and Bryant's organization opposes them aggressively. Brother Joe Hall said that the Building Trades would like to see HR1690, which would bring health care benefits to construction workers, pass through the state legislature.

A brother from Steelworkers Local 4097 asked for help on legislation affecting probation officers.

Charles Whitaker outlined the situation with United Way. Tom Carlin of TWU Local 531 made a plea for more donations to food banks, which he reported to be low on food. Gene Lantz of Jobs with Justice asked people to push the Employee Free Choice Act and attend a special Cesar Chavez birthday celebration breakfast at 8:30 AM on March 31 at Morelia's Restaurant, 2707 W Jefferson in Oak Cliff. He also talked about defeating "fast track" legislation when it comes to the U.S. Congress for renewal on June 30. Gerardo Contreras of the Labor Council for Latin American Advancement (LCLAA) encouraged people to participate in Cesar Chavez birthday celebrations, including the march at 11 AM on Saturday, March 31, in Ft Worth. Cindy Fitch spoke for the Coalition for Labor Union Women, and Nancy Hall spoke for the A. Philip Randolph Institute and the Coalition for Black Trade Unionists.

Sister Rossia Avery of the National Nurses Organizing Committee, which just joined the national AFL-CIO, spoke about the Hospital Patient Protection Act of 2007, which is being considered in the legislature. Her speech, and that of President Emmett Sheppard, were recorded for the "Workers Beat" program, 8-9 AM each Wednesday, on Knon 89.3 FM and www.knon.org.

The delegates stayed later than usual for a special treat of free pizza and beer.