I was cheered to learn that students from the University of North Texas wanted to carry out a public action for a People's Bailout during the "week of action" Dec 7- 14 called by National Jobs with Justice. Their ideas were very appropriate for the call. Even more important to me was the opportunity to work with the student movement. Most JwJ chapters have strong student participation, but North Texas has always relied on older activists who are, often as not, union members.

National JwJ has a compilation of events at http://www.jwj.org/bailout/12-08report.html. 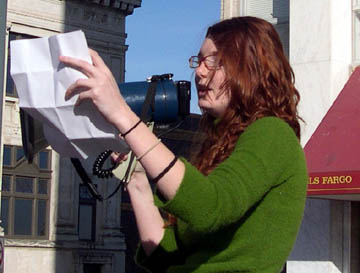 Six activists from our chapter gathered at the designated rendezvous in Dallas, and car-pooled together to Denton. Trish Majors, editor of the Dallas Peace Times, four Latino activists who are working to secure justice for employees of Great Western Erectors construction company, and I made the trip. When we arrived in downtown Denton, twenty five very enthusiastic college students were already chanting and leafletting in front of the Wells Fargo Bank.

We sang and chanted loudly for the next two hours. Passers-by responded to our "Honk for Justice" sign willingly, so a lot of noise was made. The Denton Record newspaper reporter and photographer were with us nearly all the way through the event. Police eventually came, and we stopped using our bullhorn after that. It didn't make much difference. We climbed in the back of a pickup truck and yelled our messages.

One young woman spoke on health care, another on the economic crisis and the need for a meaningful people's bailout. I spoke on the Employee Free Choice Act. If I receive copies of the other two speeches, I'll post them. My own talk is podcast at http://www.gabcast.com/index.php?a=episodes&query=&b=play&id=25792&cast=112327&castPage=&autoplay=true

The wording for our leaflets came from National JwJ:

"As many predicted, the Wall Street Bail-out has proven to be the gross give-away to the same financial bigwigs that have been pocketing millions while wrecking the real economy. Little or no benefit has gone to the working people and the real economy, at a time that we face the greatest economic crisis since the 1930s. By the time Obama is sworn in, hundreds of thousands of additional people will lose their jobs, lose their homes and lose their health care.

'It's time for a "People's Bail-Out" that fixes the real economy, restores a voice for working people in challenging corporate greed, provides emergency help to the victims of the crisis and begins building a fair economy that works for all, addressing crises in housing, health care, jobs, retirement security and the environment.

'Jobs with Justice coalitions and ally organizations around the country will take part in an emergency campaign over the next 2 ½ months to get Congress and the new administration to enact a Peoples Bail-Out.

'Immediately we call for:
* Pass a large economic stimulus/recovery package, on the scale of the emergency we face;
* Pass the Employee Free Choice Act (EFCA);
* Stop evictions due to foreclosures;
* Emergency action so people losing jobs don't lose health care.

'Lay the groundwork for a long-term recovery program including:
* Green jobs and clean energy;
* Restore worker justice, including EFCA and other reforms;
* Health care for all;
* Retirement security;
* Re-regulate the finance system and make the speculators pay to clean-up their mess
* Fair Trade and Migration policies" 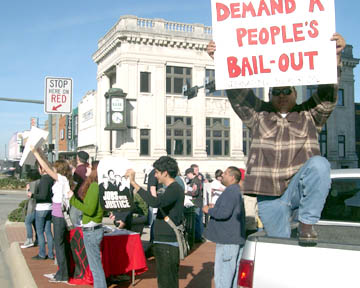