Union Volunteers Work to Turn out the Vote in District 97

Working to turn out the union vote in Texas District 97, Southwestern Tarrant County, is a great way for activists to start "tuning up" for the electoral challenges of 2008. Early voting in District 97 starts December 10 and the runoff election for State Representative is December 18. Union political action committees endorsed the Democratic Candidate, who took the most votes in the first round.

According to the Texas AFL-CIO newsletter, there are approximately 1,700 union members living with their families and friends in the District. Turnout has been so low in most local elections that they might have a significant effect on the outcome. Since the late 1990s, union families have had a larger and larger percentage of the total vote. Additionally, another trend has shown that they tend more and more to vote for union-endorsed candidates.

The new President of the Tarrant County Central Labor Council, T.C. Gillespie, recorded an interview to be played on KNON radio's "Workers Beat" program, 8 - 9 AM Wednesday, December 12. He said that union members are growing more and more conscious of the importance of politics, and more and more of them are volunteering to help. He is organizing volunteers every day from December 10 through the election, and he says the response has been very good. Gillespie encourages all activists, union and non-union, to contact him about working the coming elections. Until the election, he'll be at the IAM hall, 555 Grants Road in Ft Worth, every morning and afternoon.

On December 8, Gillespie's Communications Workers volunteers were joined by Autoworkers, Machinists, Doctors, Teachers, Ironworkers, other unions, and some with no union at all. They went out into District 97 in pairs to pass our leaflets and talk to union members. They were in and out of the hall all morning and into the afternoon. Around 1 PM, Richard Fisher of Dallas County put out a delicous meal of chili dogs with saur kraut. Most of the activists came in while there was still food, so they got to enjoy meeting up and comparing notes from around the union movement. 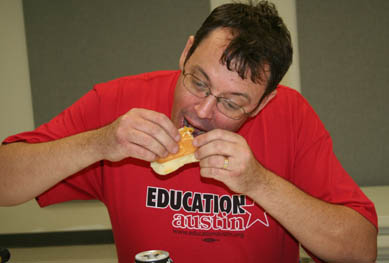 Ted Molina-Raab of the American Federation of Teachers got up early and drove to Ft Worth from Austin to pitch in. He generously posed for this picture to help show how much the volunteers were enjoying this early election effort!