Candidates Ask for Help, and Get It!

Labor's endorsed candidates are moving quickly as November approaches. They are asking all activists to join in the effort to change the general direction of American politics. Many unionists are responding, for working people know more than anybody how desperately change is needed.

At a recent gathering, State Representative Terri Hodge urged activists to help get a Texas governor who would help install a progressive program. She said that winning the governor's office was a good possibility this year. 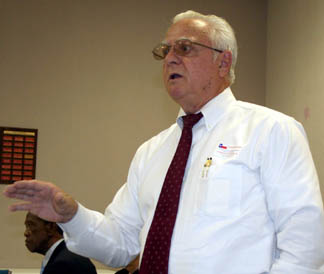 Bob Romano, a candidate for District 105 State Representative in Irving said that the "Trans Texas Corridor," also known as TTC35 because it will create a toll road to replace IH35, will be a major issue for gubernatorial and all candidates in Texas this year. Roman called TTC35 "A plan for the whole United States with an innerport run by a foreign company in Kansas City." He also mentioned the proposed privatization of public education as a big problem. 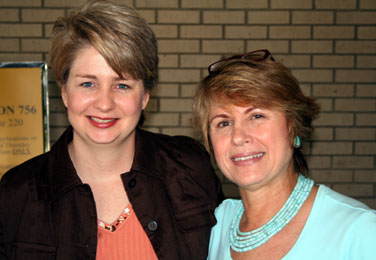 East of Romano's district, Harriet Miller (blue necklace) will run for State Rep in North Dallas. To Romano's South, Katy Hubener will try to win in the Southwest corner of Dallas County. Hubener talked about the special election earlier this year: "My race showed what labor can do!" She particularly pointed out activists from UAW Local 848 who had helped her campaign. Hubener summarized the situation: "They are worried about District106, and they should be." She added: "I will never forget labor."

Hubener has campaigned as an advocate of good public education.

Katy Hubener's mother, Ann, talked about her ongoing work as a Trustee of the Dallas County School Board. She indicated that she had great hopes for further improvements under Board Chairman Larry Duncan.

Representative Rafael Anchia, pictured with State Representative Candidate Barbara Mallory-Caraway, told union activists that his immigrant father was dedicated to union organizing. When Anchia's mother was carrying him, his father was fired for trying to organize a union at his worksite. It was his second firing for that same reason! 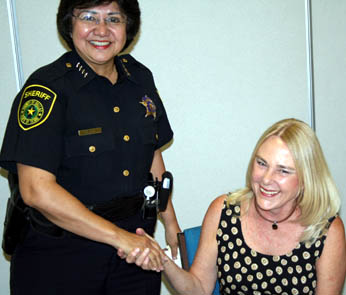 Another candidate who needs volunteers is Sheriff Lupe Valdez. She is pictured with the Dallas AFL-CIO's Janet Shaw

A lot of union activists begin the political season by assembling yard signs twice a week. Organizer Cindy Fitch of CWA Local 6215 is the heroine of that story. Activists will eventually hammer those signs into yards, make phone calls, make house calls, and carry out dozens of seemingly-menial tasks that, added together, will make a difference in November! 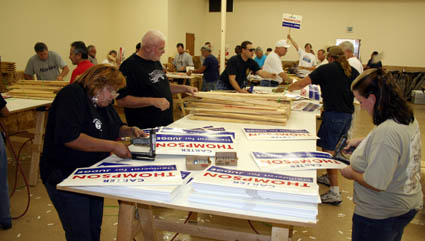