Farmers Branch has 27,508 people on the Northern rim of Dallas. In an apparent attempt to jump-start their political careers, some of the City Councilpersons there have taken some of the most aggressively racist actions in the recent history of America. They want to connect their police to the Immigration and Customs Enforcement (ICE) bureau of the federal government, ban every language but English, and make it impossible for undocumented workers to rent living space there. The original proposal by Coucilman Tim O'Hare included sanctions against employers, but it was dropped.

The city has 37% Latinos, and they are not happy about the opportunistic moves of the Council. Reactionary Anglos, on the other hand, pack the Council meetings and applaud mightily with every anti-Latino statement or action. Residents say that both the Minutemen and the Ku Klux Klan have come to the town.

There are 3 lawsuits against the Council's actions. One, filed by an individual, says that they violated Texas "Open Meetings" law when they planned their ordinance. He was able to get a two-week injunction from the January 12 implementation date. The American Civil Liberties Union and the Mexican American Legal Defense Fund filed another lawsuit on constitutional grounds. Local merchants joined together in a third suit for damages already being incurred due to a severe drop in their revenues. Similar situations are developing in Hazelton, Massachusetts, Escondido, California, and other towns affected by the general climate of encouraging racism by reactionaries in politics.

More important than the lawsuits is the petitioning campaign that filed more than enough signatures to force an election on the ordinance for May 12. In a scramble to further their careers, the Councilmen are said to be developing a new version of the ordinance. North Texas activists are getting behind the lawsuits and offering to help with the elections. 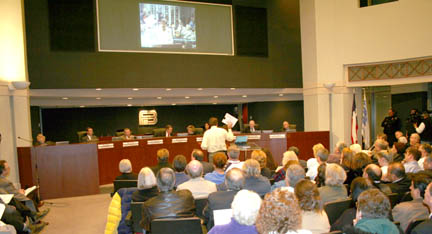 On January 8, the council voted unanimously to go ahead with implementing their ordinance