Reactionaries Get Uglier on Immigrant Rights

Civil Liberties and other progressive organizations are calling for activists to come to a special state hearing at 10:30 AM Friday, February 1, in the University Theater at the University of Texas at Dallas, 800 W. Campbell Rd in Richardson. We hope to stem the trend to pass harsh, unreasonable, and unworkable local and state anti-immigrant laws.

The borderline insane laws that have already passed in Oklahoma, Georgia, and a few isolated suburbs around Texas and the nation reveal that the reactionarieshave no intention of solving the immigration problem. Their "solutions," like the crazy fence, have nothing in common with reality. They are focusing on undocumented workers for the same, single reason that Hitler focused on the Jews - to gain power for themselves!

The Archbishop of Oklahoma City and other church leaders initiated a pledge that says, "We stand together, in solidarity, in defiance of this law because of our allegiance to a higher law; the law of love of God and humanity." Click here for the Oklahoma City Diocese statement of resistance.

The Bishop Slattery of Tulsa published a strong statement that includes this, "When it becomes a crime to love the poor and serve their needs, then i will be the first to go to jail for this crime and I pray that every priest and every deacon in this diocese will have the courage to walk with me into that prison!" (Source: Houston Catholic Worker, front page)

The undocumented cannot defend themselves alone any more than the Jews could stop Hitler. It will take all of us together. I intend to be at the hearing and will testify if needed. It is my understanding that Dallas Area Interfaith, ACLU, MALDEF, ACORN, Representative Alonzo, Representative Anchia, and the anti-racist team from the Dallas Peace Center will be there. Jobs with Justice will be there, and I sincerely hope you will, too.

Below are statements received from ACORN, MALDEF, and ACLU

This Friday, two standing committees at the Texas Legislature will conduct a public hearing on immigration enforcement by state and local officials.

The ACLU is concerned about this hearing because even though the Constitution is clear that, with some exceptions, immigration enforcement is a federal responsibility, some state and local officials and agencies are capitalizing on the current anti-immigrant public sentiment to expand their powers and deny due process to detained individuals. Because Latinos, including US citizens and legal residents, are being targeted, profiled, and harassed, our goal at this hearing is to advocate for the equal and fair treatment of ALL Texans.

Below you will find a description of the issues to be addressed at the hearing, some background information, and what you can do to help prevent further criminalization of immigrants in Texas.

Who: Advocates, immigrants, and Texans who support equality, diversity, and civil rights for all Texans

What: Attend a public legislative hearing on immigration enforcement by state and local officials

Why: To prevent further criminalization of immigrants in Texas

The Hearing
The Texas House Committees on Corrections and County Affairs will hold a joint public hearing at the University of Texas at Dallas in Richardson, Texas from 10:30am to 4:00pm on Friday, February 1, 2007, on issues surrounding the role of criminal justice personnel in enforcing federal immigration law and the impact of "illegal immigration" on the criminal justice system in Texas.

The purpose of the hearing is two-fold: The first is fact-finding, i.e. for legislators to determine how jails, prisons, and probation departments currently identify and process undocumented immigrants. (See bottom of this message for the text of the charge.) The second purpose is for legislators to hear public input on these issues.

Background
The hearing takes place against the backdrop of primary election season and the recent bitter experiences of two nearby Dallas suburbs - Farmers Branch, where the city council continues its efforts to prohibit landlords from renting to undocumented immigrants, and Irving, where Latinos have been targeted for detention, arrest, and deportation through the city's "24/7 Criminal Alien Program". If testimony at the hearing is disproportionately anti-immigrant, it will provide political momentum for anti-immigrant legislation next session (which begins in January 2009).

Significant numbers of anti-immigrant advocates are planning to attend the hearing in hopes of swaying committee members to enact harsher laws against immigrants. Though we don't know what issues these advocates will focus on, it is likely that they will push for expanded roles for state and local agencies in immigration enforcement, such as the "24/7 CAP" program used in Irving, Texas.

It is crucial that the testimony and makeup of the audience at the hearing reflect the fact that many Texans support immigrants' rights, want to preserve the diversity and economic vitality of our communities, and do not support the further criminalization of immigrants in Texas. In the current political environment, elected officials are under tremendous pressure to support pernicious and mean-spirited measures that threaten our fundamental rights and the fabric of our society.

2. Speak as a member of the public - After invited testimony concludes, committee members will hear testimony from members of the public who would like to share their experiences or views on the subject. This is a great opportunity to make your voice heard. Since testimony will be cut off at 4:00pm and witnesses will be placed on a list on a first come-first serve basis, those wishing to speak should plan on arriving at the hearing before 10:30am. There will be a sign-up sheet for those wishing to speak.

Legislative hearings are unique forums for public input. If you would like to consider speaking at the hearing, and have not done so before, below are some tips for effective speaking at legislative hearings:
a.. Be Brief - You should keep your comments under 3 minutes. If there are lots of people signed up to speak, the Chairman may limit all comments to 3 or 5 minutes and cut you off if you go beyond the limit. You will be most effective if you make your points succinctly and stay within the allotted time.
b.. Stay On Topic - Keep your comments within the topic of the hearing - enforcement of immigration law by city and county law enforcement agencies, in state prisons, and by probation officers, including cooperation between these entities and ICE. Personal experiences, i.e. stories, are especially effective and encouraged.
Examples of relevant subjects:

· Having a family member arrested and deported

· The effects of the 24/7 Criminal Alien Program in Irving, Texas

· The effects of such policies on your business or local economy

· The effects of such policies on public saftey, immigrants' willingness to report crime, or community policing efforts

Examples of not relevant subjects:

· The ordinances in Farmers Branch

· Police brutality or other abuses, in general

Attached are a press release by the House Corrections Committee announcing the hearing and a news article about the interim charge.

For logistical questions about the hearing, please contact the Corrections Committee Clerk, Raenetta Nance at (512) 463-0796 or raenetta.nance@house.state.tx.us. For other questions, including assistance with talking points on issues related to state and local involvement in enforcing immigration law, feel free to contact me at the numbers listed below.

Austin,TX - Today, the Texas House Corrections Committee and the Texas House County Affairs Committee announced a public hearing on immigration scheduled for February 1, 2008 in Richardson, Texas . The hearing is a result of a joint charge issued by Texas Speaker Tom Craddick (Midland) to be studied during the legislative interim which ends January 2009. The Corrections Committee's chairman, Rep. Jerry Madden (Plano), had requested the charge to address the growing immigration crisis.

The committee members will hear testimony from the Texas Department of Criminal Justice, local officials, experts in the field and advocacy groups. "As Speaker Craddick has said, the federal government has not acted and so the State must step forward and do what we can on this important and emotional issue," ...

ACORN Stands Up for Citizenship Applicants 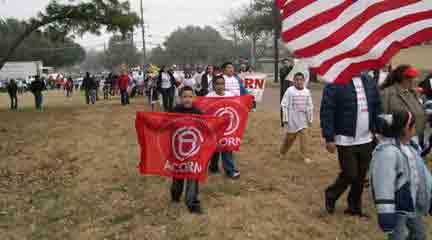 Early in the morning on Monday, January 28, two big buses full of ACORN members came into DAllas. They had ridden all night to join Dallas activists in protests at the Homeland Security offices, which includes the U.S. Customs and Immigration Services (USCIS). Last July, USCIS raised the price of applications. They gave the excuse that they would be able to process applications faster, but they didn't. In fact, ACORN says that applications are now taking twice as long to get through the processing.

Some of us are suspicious that authorities do not want the new citizens processed in time to participate in the November elections. 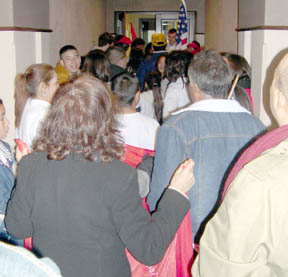 After a long march, we had a sizeable rally in front of the USCIS offices. Representative Roberto Alonzo and firebrand Margarita Alvarez led a number of speakers. Then we loaded into the two buses and went calling on Senator Kay Bailey Hutchinson at her offices on Hiway 75. The guards tried to keep us out of the building, but a bunch of us made it as far as the Senator's office upstairs. While dozens of us stood in the hallway, leaders presented hundreds of letters demanding that the government process citizenship applications.