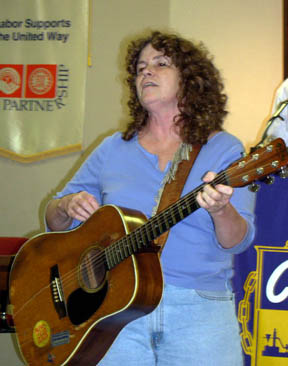 Feeney told the Dallas unionists that she had made it her business for 37 years to travel the world "Comforting the afflicted and afflicting the comfortable" with her music. Feeney appears at union activities everywhere. She has created a number of outstanding labor music CD's that include: "War on the Workers," and "Scabs." She sang both of those for the Dallas audience.

Members contributed $150 for a boilermaker's union that was locked out by the Celanese Corporation. Earlier, she talked with members of the United Transportation Union (UTU) and picked up a $600 donation. Feeney asks people to look at www.boilermakers484.org to find out about the lockout and make contributions.

News from the UTU and from United Food and Commercial Workers Union Local 1000 indicated that the labor movement in Dallas is standing strong against the highly-publicized splits among national union leaders.

The Dallas unionists complimented Sister Cindy Fitch for her great work in the political arena. Many of the county's unionists are throwing themselves into volunteer campaign work.