Two labor leaders from France sat in on part of the Texas AFL-CIO Legislative Conference February 12 in Austin. Gilles Rousselet is Secretary General of the regional union, "CFDTY Languedoc-Roussilon" in the south of France. Mao Peninou is Mayor of part of Paris. The two met with Texas AFL-CIO Communications Director Ed Sills and a handful of conference participants in the upstairs library at the Texas AFL-CIO building on LaVaca Street. Using an interpreter, the french and Texas labor activists compared their situations.

Rousselet was curious about the fact that American unionists earn far more, in wages and benefits, than non-union workers. In France, he said, every gain that the trade unions make is enjoyed by all French workers. This was particularly astounding when we compared numbers. While America's union density has slipped below 13%, the french have only about 2 million unionists out of 25 million workers -- 8%! And yet, French workers have health care and better benefits than Americans!

Rousselet also said that French unions do not organize an entire bargaining unit, as we do here. There may be members of several different unions in a single 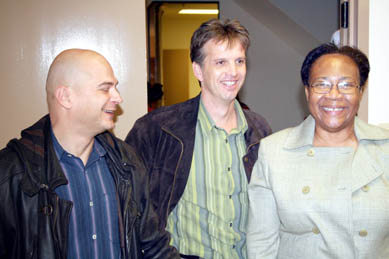 workplace. He said that French unions do not participate in politics. This may partially be explained by the nature of the French legislative system. There, candidates don't just "win" or "lose" as they do here. Political parties are assigned a certain number of legislative seats in relation to the percentage of vote they captured. Consequently, even small parties may have some representation. Unions are associated with political parties.