As a group, union members are increasingly the best voters in America. When statistics are released after each election, union families have accounted for a larger and more disproportionate share of the voters. And they vote overwhelmingly in the interests of working people.

That doesn't mean that they can't get better. 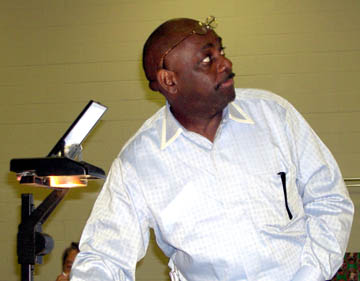 United Auto Workers Region 5 educator JD Gray visited North Texas UAW officers on June 29. At the UAW 848 hall in Grand Prairie, he told the union leaders that their proud union was created in 1935, during the same year that brought "Labor's Magna Carta," the National Labor Relations Act. Before that time, unions had very little legal standing. Politics had made the UAW and the giant leap in American progressive unionism possible. "The very existence of this union was born out of politics," Gray said.

As a case in point, Gray talked about the way that federal courts are now allowing bankruptcy judges to set aside union contracts. The perpetrators are judges who were appointed by the President of the United States. Gray talked about the Steelworkers, airline unions, and the legal attack against Delphi workers. He said, "The court system now says that employers can set aside the gains that we had." 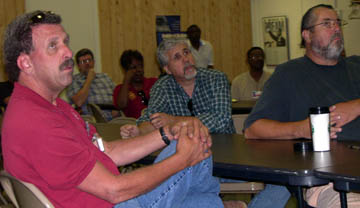 Local 848's leaders listened carefully to what JD Gray had to say.

It was pointed out that Gray's audience had first-hand experience with bankruptcy judges and political climates. In 1986, LTV corporation attempted to use bankruptcy laws to abrogate conditions of their contract with Local 848 and with Steelworkers unions. A few aerospace workers from Grand Prairie and from Camden, Arkansas, attended a protest rally outside LTV's national headquarters in downtown Dallas. They were amazed when three busloads of Steelworker retirees from East Chicago, Indiana, showed up! The big reason for the unionists' eventual victory was not their mobilization, but their relationship with political leaders. Congressman Martin Frost, who had been strongly supported by Local 848 members, was credited with stopping LTV's bankruptcy takeaway. Years later, under a much worse political regime, corporations began to routinely do what LTV had only tried.

JD Gray went on to talk about political strategies to increase labor's electoral clout. He solicited ideas from union leaders. Gray told his audience, "Our members have to see the big picture. They have to see that their wages and benefits are being lost. That's the bottom line."