Health Care Demands Are Getting Louder

Since Michael Moore's film documentary, Sicko, was released, more and more Americans are moving into action to demand health care reform. Texans are fortunate that the National Nurses Organizing Committee, a close ally of North Texas Jobs with Justice, is pushing the issue here.

The Texas AFL-CIO passed a resolution favoring House Resolution 676 at their convention August 1-4. The Texas State Employees Union had led the way earlier this year, and a number of smaller organizations had endorsed similar legislation before the San Antonio Central Labor Council passed it just prior to the convention. The way is now wide open for all Texas progressive organizations to pass resolutions supporting single-payer universal health care. For a model resolution, see www.txsenior.org/hr676.htm. 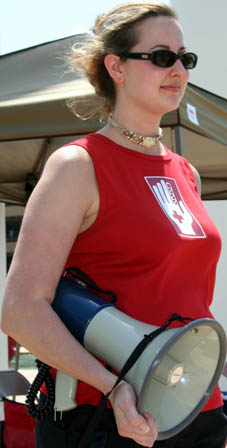 A number of organizations for health care reform are springing up. The Glantz family of Dallas decided, after seeing Sicko, to put up a web site: www.protesthealthcare.org. A day later, according to webmistress Katie Glantz, they had 1,000 hits. The family decided to call a public rally which took place at Dallas City Hall at 11 AM on Sunday, August 5. Katie Glantz appeared on KNON radio's "Workers Beat" program on Wednesday, August 1. Jobs with Justice activist Gene Lantz spoke at the rally, as did Richard Stephens of the National Nurses Organizing Committee.

Everyone was asked to join the North Texas Jobs with Justice meetings each 2nd Wednesday (August 9 this month) at 7 PM at the Oak Cliff Methodist Church, 547 E Jefferson in Dallas. Entrance and parking in rear. 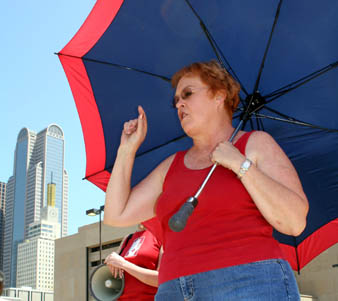