Government Finally Gets a "Guilty" on Charitable Group

After 15 years and millions of dollars worth of dedication, government lawyers were finally able to get a jury to convict the five former leaders of the Holy Land Foundation charity of Richardson. The first trial, over a year ago, ended in a hung jury. The next one will be an appeal, according to Hadi Jawad, who organized community support for the defendants.

Among the many prestigious activists who joined the support coalition was State Representative Lon Burnam. Burnam is Director of the Dallas Peace Center when not in the legislature. Walt Harrison took the photo below, and filmed a video of Representative Burnam explaining the far-reaching significance of this case and the larger civil rights struggle. Click here for the 6-minute video: 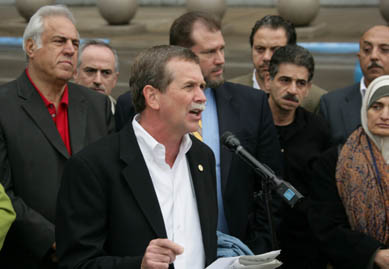