On October 22, one of the U.S. government's longest and most difficult prosecutions came to an end. The Holy Land Foundation and its chief leaders were about to be found innocent until, suddenly, some of the jury members began to recant. Three days earlier, when the verdicts were sealed, they were unanimous. No one seems to find it suspicious. Nevertheless, the judge ruled the whole effort a mistrial. The government had been working on this particular prosecution of an Islamic charity since the 90s, and had frozen their accounts and shut down the foundation in 2001 during the hysteria after 9/11.

The government got a lot of what they wanted. For six years, they successfully stopped the largest Islamic charity in America. During those years, they successfully intimidated all other Muslims, especially those wishing to contribute to save the children in the occupied territories of Palestine. On the other hand, they also got a lot of egg on their faces, because they had persecuted Muslims aggressively for years and ultimately failed to make their case. Dallas activist Johnny Wolf, who helped 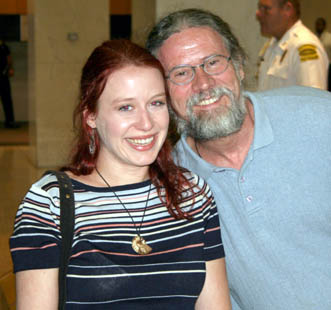 the defense every day of the long trial, called it "Islamophobia." He and Beth Freed (pictured) were justifiably happy in the Courthouse at the end.

The case was (and still is) widely reported: