I. Update Today the hunger strikers enter their third day. The strikers remain strong and determined, despite the physical challenges of going without food. Washington D.C. weather is harsh this morning, with strong winds and rain, but the strikers are nonetheless staying outside in front of the White House.
On Wednesday, May 14, five workers launched their water-only hunger strike in Lafayette Park, in view of the White House. The workers represent the demands of a group of Indian guest workers who broke an 18-month US-Indian labor trafficking chain earlier this year. They are demanding:
- Continued presence in the U.S without the threat of deportation - the right to participate in a criminal trafficking investigation into their former employer, Northrop Grumman subcontractor Signal International, and US and Indian recruiters.
- Congressional hearings into abuses of the guest worker visa program in the US Gulf Coast
- Concrete action from the Indian government to protect future Indian workers.

Jobs with Justice helped launch the hunger strike with an emotional rally of support, with representatives from the AFL-CIO, the Metal Trades, South Asian Americans Leading Together (SAALT), Asian Pacific American Labor Alliance (APALA), the United Food and Commercial Workers, the Hip Hop Caucus, the Low Wage Worker Coalition, and many other allies. 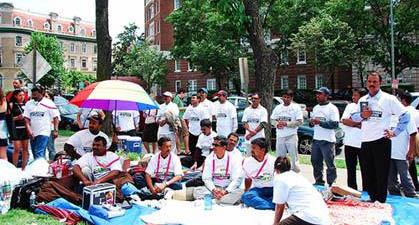 II. Call for Action
The workers are asking for a number of solidarity actions.
1. Wednesday, May 21 nation-wide solidarity actions on the week anniversary of the strike. Possibilities for actions include one-day solidarity fasting; prayer vigils; public educational events; petitioning. Please report your action plans to Krista Hanson, krista@jwj.org as soon as possible so we can report all actions to the workers and to the media. There will be a major rally and press event on that day in Washington D.C.

2. Petitions and delegations to Congressional offices. There is a sign-on letter that Congressional Representatives and Senators will send to the Department of Justice calling for the granting of continued presence for the workers in the U.S. Solidarity activists can gather signatures on the petition and then deliver it to Representatives' offices. The petitions can be delivered on May 21, and again during the week of May 27-30, the congressional recess when Reps are in their home offices.

3. Raise money for the strike fund. The workers are putting in tens of thousands of dollars to make the hunger strike possible, and they need funds to pay for transportation, housing, and all the other logistical support. For information on contributing, go to www.neworleansworkerjustice.org/contribute.htm

Visit the workers if you are in or near Washington D.C. There is a schedule of where to find them on DC JWJ's web site, http://www.dcjwj.org/node/202.
Krista Lee Hanson
Field Organizer
Jobs with Justice
1325 Massachussetts Ave, Suite 200
Washington DC 20005
(202) 393-1044 x225
krista@jwj.org, www.jwj.org
SUPPORT THE SIGNAL "GUEST WORKERS" ON HUNGER STRIKE, May 14 - victory! http://www.unionvoice.org/campaign/signal *