On April 1, the Jobs with Justice Workers Rights Board panel pushed back the borders of ignorance about immigrant issues. They presided over the first in a proposed series of hearings about working conditions for North Texas immigrants. Reverend Diane Presley of Oak Cliff Methodist Church provided the meeting room. Walt Harrison provided photographs and video equipment, which was operated by Brent Herndon. The panelists were syndicated commentator Tunde Obazee, Dr. Joerg Rieger, Dr. Isabel DoCampo, and State Representative Roberto Alonzo. 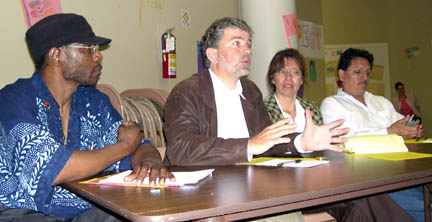 After Reverend Presley welcomed the participants, Jobs with Justice organizer Gene Lantz summarized some of the information already accumulating on this web site. He added information obtained that day by conferring with an immigration counselor to the effect that undocumented immigrants pay taxes, perhaps even more than documented workers. They cannot get income tax refunds and their Social Security payments are lost to them forever. Property taxes on rental property is as high or higher than that on homeowners.

Undocumented workers are eligible for very few government benefits. They can have babies and get emergency medical care. Their kids can go to school. They get police and fire protection, and they can file civil suits. Occupational Safety and Health (OSHA) protection, such as it is, is available to all workers. Walt Harrison pointed out that undocumented workers could get workers' compensation benefits for job accidents, if they knew how.

Panelist Tundee Obazee opened with some of his own experiences as an immigrant from Africa. He was working as an aerospace designer when his employer learned that he was undocumented. He was demoted to the janitorial force. He had great difficulty, but was finally able to take advantage of the 1986 amnesty.

Dr. Joerg Rieger is an immigrant from Germany. He said, "My goal or being on the panel is to find out more from you about your experiences." Rieger, author of several books, said he hoped to add this experience in his future writings.

Dr Isabel DoCampo was thoughtful enough speak in both English and Spanish. "Why am I here?" she asked. "Because I really believe that the future and hope of humanity is in the hands of the people who are simple and without economic or political power. We are people who try to keep and speak the truth. I am here to discover the truth. Together, we shall tell the truth. This country can only be strong as it is measured by its weakest members."

Representative Alonzo had just come from a public demonstration of 1,500 people in Arlington. He lamented the day's news about punishments against high school students for demonstrating during school hours. "They did it, I think, for the right reasons." Alonzo's activities in civil rights extend over many years. He recalled a great march in downtown Dallas in 1999 over immigrant rights. He said he hoped for 20,000 on April 9, which would make it the largest civil rights march in Dallas history. Representative Alonzo recounted an amazing story about a relative who was born a citizen in Toledo, Ohio. Immigration officials seized and deported him, and he had to find his own way back to the United States to establish his rights.

Gene Lantz asked all participants if they should form a Jobs with Justice contingent in the April 9 march, and all agreed with enthusiasm. Union organizer Willy Gonzalez of UNITE-HERE! then took over and helped with testimony in Spanish from immigrants.

Juana
Juana was born in Mexico. When she and other workers conducted their own meeting in Boise, Idaho, their employer called the dreaded immigration services. Juana recounted the difficulty and humiliation of being handcuffed and thrown into prison. With incisive questions, panelists brought more of Juana's story into the open. They were especially concerned with questions about how parents with children were treated during raids, arrests, jailings, and deportation. Roberto Alonzo said that officials are trying to create jails for families. Right now, there are only jails for adults.

Jorge was next. He greatly expanded our understanding of the topic by reminding us that many immigrants come here because giant transnational corporations have used "free trade" investment "agreements" to destroy their jobs at home. Additionally, he pointed out that many Central Americans have come here seeking asylum from the murderous governments at home. 500,000 Guatemalans were killed and 165,000 "disappeared" during his youth in Guatemala. "It is important to publicize this repression and the globalization that is causing these problems," Jorge told the audience in Spanish. Panelist Tunde Obazee asked how hard it was for Jorge to leave his home. Jorge replied that it was easier than staying, because he would have been dead if he stayed at the University in Guatemala City. Jorge answered other questions about working conditions and treatment in this country. Dr DoCampo pointed out that lower-level Immigration Service bureaucrats have a lot of latitude, but that the federal judges wh 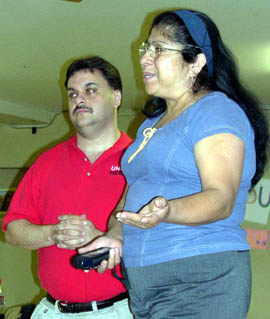 o handle the higher levels of naturalization proceedings tend to stick to the actual law.

Esperanza came next. She worked for a North Texas company for 10 years, then was fired. "The boss did not like Hispanics. He treated us very badly and used bad words to us. Thank God, I had my residency, so I could stand up to him. But other women were afraid." Working with the UNITE-HERE! union, Esperanza carried out a successful fight that eventually resulted in re-instatement and back pay. The racist boss was fired during the process!

Representative Alonzo asked Esperanza to expand on the effect of having a union in the workplace. Her responses gave a ringing endorsement for unionization.

Margarita was the last person to testify before our time ran out. She came here with 5 children from Central America. The trip took a month. When she was trying to prove her refugee status, immigration officials asked her for proof of repression in her home country. She answered, "Do you want me to bring the cadavers of my family?"

"No human being is illegal," she told us and proudly announced that she is now President of Voices for Immigrants. Just before the Jobs with Justice hearing, Margarita participated with peace activists at a public action at Exxon over gas prices. "I love peace, and …those that don't receive justice." She told us.

Gene Lantz asked for cash donations for Oak Cliff Methodist. He suggested April 22 for the next hearing, but April 29 was also suggested. Everyone will be contacted as soon as details for the next hearing are settled. Nobody said "goodby," but rather, "I'll see you at the march on April 9!"