Jobs With Justice Makes a Statement

On March 23, at a press conference organized by the Dallas Area Interfaith, I made this public statement for Jobs with Justice:

The North Texas Chapter of Jobs with Justice is committed to workplace protection for all, including immigrants. In analyzing all of the various so-called "reforms" being proposed, all one really has to understand is whether they would tend to raise or lower wages. Virtually every proposal in Congress would tend to lower every American's wages.

In 1999, the American labor movement realized that fighting against immigrants would continue to fail to help American workers. The AFL-CIO, in that year, changed to a policy of helping immigrants get organized. Organization is the only way that workers can increase their income and protect their rights. Jobs with Justice has been circulating petitions and sample resolutions that ask for fairness for immigrants.

The National AFL-CIO Executive Council issued its "Responsible Reform of Immigration Laws - Must Protect Working Conditions for all Workers in the U.S." position paper on immigration law reform at its quarterly meeting held on February 29, 2006. For the full text, visit www.aflcio.org. 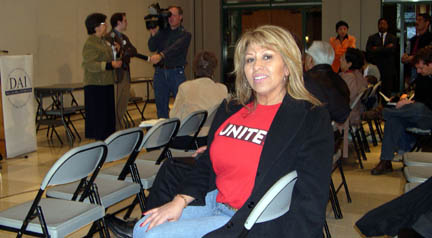 Maria Mata (pictured) and Maria Campos from UNITE-HERE! made a splash with the reporters and religious leaders at the press conference. They offered to provide union spokespersons for the many workshops being planned in churches

After Jobs with Justice made our decision and began petitioning for fairness, we learned that we had boarded a fast-moving train. The Dallas Area Interfaith, the leading umbrella organization of religious groups in North Texas, had already scheduled a press conference favoring fair legislation in Congress. Click here for an account. The statements of religious leaders were inspiring, particularly that of Lutheran Bishop Kevin S. Kanouse. Mighty demonstrations have taken place all over the nation, including in Dallas on 3/25