Religious Leaders Speak out for Justice

Dallas Area Intefaith (DAI) organized a press conference at the Guadalupe Cathedral in downtown Dallas on March 13. They spoke in favor of reasonable immigrant reform legislation, and very strongly against the legislation passed by the House of Representatives in December and proposed in the Senate by the Senate Majority Leader. Both proposals would criminalize all undocumented workers and anybody who helped them. They would provide for giant walls to be constructed on the Mexican border and jail terms for millions of immigrants and citizens.

Catholic Bishop Charles Grahmann began with the Book of Leviticus to quote a number of biblical passages commanding all Judeo-Christians to welcome foreigners and treat them fairly. He concluded by listing the qualities of immigrant legislation that would constitute fairness, including protection of workplace rights, reuniting families, and providing a path to citizenship.

Gene Lantz of North Texas Jobs with Justice pointed out that the proposals put forward by Senator Frist and Representative Sensenbrenner would tend to lower wages for all Americans. He made it loud and simple: "If it lowers wages, we're against it!" Jobs with Justice is petitioning for fair legislation. Supporters from the UNITE-HERE! Union, which has organized hundreds of immigrants into union locals, also talked to reporters and introduced themselves to religious leaders.

The conference was organized by Dallas Area Interfaith, the largest and most comprehensive umbrella group of religious organizations in North Texas. Spokesperson David Ramirez said, "We will continue to press forward in support of comprehensive immigration reform and call on our elected officials in Washington to work in a bipartisan manner to establish policies that will safeguard the rights and inherent dignity of all migrants, particularly the undocumented, including their rights as workers." 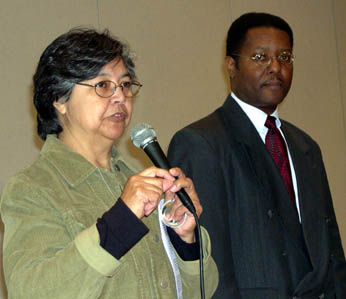 Audio from the press conference will play on KNON's "Workers Beat" program between 8 and 9 AM on Wednesday, March 29. It is 89.3 FM or www.knon.org

After Jobs with Justice made our decision and began petitioning for fairness, we learned that we had boarded a fast-moving train. The Dallas Area Interfaith, the leading umbrella organization of religious groups in North Texas, had already scheduled a press conference favoring fair legislation in Congress. Click here for an account. The statements of religious leaders were inspiring, particularly that of Lutheran Bishop Kevin S. Kanouse. Mighty demonstrations have taken place all over the nation, including in Dallas on 3/25