The President of United Autoworkers Local Union 276 at General Motors in Arlington, JR Flores, appeared on KNON radio November 26 to explain the situation facing American workers. His union supports the proposal for $25 billion in bridge loans to America's auto makers, who are threatening to go into bankruptcy.

Flores talked about the millions of jobs connected directly and indirectly to the American auto industry. Many of those workers would be laid off or significantly downgraded by the anti-labor bankruptcy judges in today's courts. More millions of retirees would be hit, and the guarantor of pensions in America, the Pension Benefit Guaranty Corporation, might be strained enough to fail.

Flores also talked about the devastation in the local economy around Arlington if his own plant should be closed. He gave the radio audience a short description of the socially valuable work done by his union. The Civil Rights and Veterans' Committees were especially praised. Flores said that his union members recently contributed over $60,000 to food for the poor of North Texas. Their contribution to progressive politics is immeasurable. 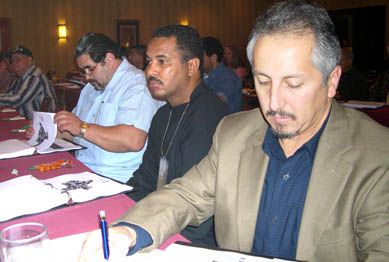 JR Flores is also a leader of the civil rights community. He was recently elected President of the Texas Labor Council for Latin American Advancement (LCLAA)

The following came recently from the UAW International:

Next week the House and Senate are expected to vote on legislation to provide an emergency $25 billion bridge loan to GM, Ford and Chrysler to help weather the current severe credit and economic crises. Without this assistance, there is a real danger that the three companies will run out of cash and be forced to cease all manufacturing and business operations in the near future.

The collapse of these companies would be devastating:

-- In addition to the hundreds of thousands of Big Three workers who would lose their jobs, up to 3 million other workers could see their jobs disappear at dealers, suppliers of components and materials, and other businesses that depend on the auto industry.

-- Almost 1 million retirees and their spouses and dependents could suffer cuts in their pension benefits and the loss of health insurance coverage.

-- The federal pension guarantee program could be saddled with enormous liabilities, jeopardizing its ability to protect benefits for millions of other workers.

-- Because of the importance of the auto industry to our entire economy, the collapse of the Big Three auto companies would aggravate the current recession, creating further hardships for working families and communities across the United States.

-- Revenues to federal, state and local governments would be sharply reduced, forcing drastic cuts in vital social services at the time they are most needed.

Congress can prevent these devastating consequences. The federal government has already stepped forward to provide assistance to Wall Street and financial institutions. It is now time for Congress to help Main Street by providing urgently needed help for the auto companies.

You have probably seen or heard some commentators who are trying to blame you and your fellow UAW members for the current situation of the companies by attacking our "overly rich" wages and benefits. We need to rebut these false charges, and make it clear that active and retired UAW members have already made enormous sacrifices in the 2005 and 2007 collective bargaining agreements.

Other commentators have tried to blame the Big Three for their current situation by saying it is attributable to their insistence on producing "gas guzzling" vehicles. This overlooks the major progress the companies are making in bringing forward more fuel efficient vehicles. More importantly, it ignores the fact that the current crisis is due to the huge drop in overall auto sales that has been caused by the larger credit and economic crises that have engulfed our entire nation.

Auto sales in October were a mere 10.8 million on an annualized basis, the lowest level in 25 years. All automakers reported steep declines in their sales. The problem is not that consumers don't want to buy the quality products that GM, Ford and Chrysler are making. The problem is that consumers have stopped buying vehicles from any companies.

Please call your Representative and Senators now. Or send an e-mail. Urge them to vote for legislation to provide an immediate $25 billion bridge loan to the Big Three auto companies. Tell them this is essential to prevent the liquidation of these companies and devastating consequences for millions of workers and retirees and for our entire economy.

The legislation to provide assistance to the auto industry will likely be taken up by the House and Senate sometime next week. So please call or e-mail right away!