Jobs with Justice Focuses on Action 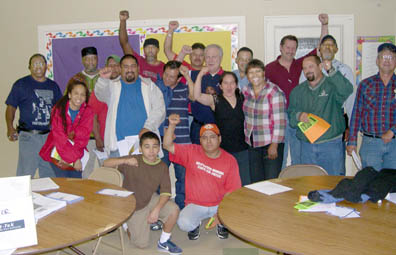 Ironworkers from Great Western Erectors are in town and looking for help. They have a leafletting early Friday, April 11, 7-9 AM at 3500 Wheatland Road, right off Hiway 67. Earlier, while leafletting a construction site at Charleton Methodist hospital, the union men became the focus of what might become a major civil liberties issue. Like most Jobs with Justice activists, they were leafleting legally on the sidewalk right-of-way. The Methodist Hospital police decided to stop them with an obscure city ordinance relating, believe it or not, to panhandling! As far as is possible to ascertain, the City has never actually enforced this ordinance against the myriad panhandlers working the stop lights all over town. However, they have decided to use it against union people doing legitimate union business!

But wait, it's actually worse. They aren't using this far-fetched legal concept against all unionists, but only those who Latino. In the spirit of the times, law enforcement authorities are taking every opportunity to broaden their scope when dealing with people suspected of knowing how to speak Spanish.

The Jobs with Justice activists at the April 9 meeting offerred to help the Great Western Erectors employees if they want to pursue this important civil liberties issue, as it could soon affect us all. Meanwhile, the fight for justice in workplaces goes on, and activists volunteered to help with the next effort. Great Western's corporate headquarters is in Dallas.

The group came close to completing our plans for the Texas delegation to the National JwJ conference in Providence, Rhode Island, May 2-5. Delegates plan to get together in Providence to make sure that they bring back as much as possible to benefit our local activities.

We had an update on health care issues that included a report on the National Nurses Organizing Committee's victory in Houston and other drives around the state. Darryl Russell, organizer, made the report. The Rally for Health Care that took place at UAW 276's hall in Grand Prairie the day before was a smashing success with speakers such as State Representatives Roberto Alonzo and Kirk England as well as Texas AFL-CIO President Becky Moeller.

Our central issue: gobblelization, has reared its ugly head again. This time, Bush wants a so-called "free trade agreement" with Colombia. Union leaders have put out a lot of information about what a terrible idea Bush has. Info is at www.aflcio.org, www.changetowin.org, and on the front page of Dallas' Novedades newspaper. Our group decided that we would put together a public action if we can find organizations willing to coalition together. It might be possible to combine the Colombia issue with the annual "Workers Memorial Day" on April 28, when we memorialize people who were maimed or killed on the job. After all, 2,500 union activists have been murdered in Colombia -- while on the job.

Kenneth Stretcher of SEIU Local 100 says the Dallas City Council will consider a new "Living Wage" resolution at their regular meeting on April 23. We voted to join the coalition and help when Councilwoman Angela Hunt presents the non-binding resolution.

Here is a new web site for laid-off workers: www.unemployedworkers.org. The economy reached a crisis for workers some time ago.

We collected $51 for Oak Cliff Methodist Church, which hosts our second Wednesday meetings. Almost all of the JwJ chapter member organizations from 2007 have caught up their affiliation fees for 2008, and we have added three more unions.