On the afternoon of July 10, North Texas Jobs with Justice first became aware that a major civil rights coalition planned an action on the morning of July 12. Reverend L. Charles Stovall, local President of the Southern Christian Leadership Conference (SCLC), had brought the group together quickly after a Social Justice conference at Friendship West Baptist Church. Reverend Frederick Douglas Haynes, pastor of the extremely large congregation, joined in and brought the lions' share of the activists. President Bob Lydia of the Dallas NAACP was on board. North Texas Jobs with Justice asked for and received cooperation from the Dallas AFL-CIO, Texas AFL-CIO, Progressive Christian Association, and Dallas Peace Center.

The target was Congressman Pete Sessions, who had joined the other right-wing members of the Texas delegation in stalling legislation to extend the Voting Rights Act of 1965, one of the most important pieces of civil rights legislation since Reconstruction. The crowd came mostly from Friendship West and numbered 115, with 10-15 activists who had heard about it from other progressive organizations or on KNON radio's "Workers Beat" program that morning.

The group prayed and sang outside Sessions' office building, then Reverend Stovall and the coalition leaders went to the Congressman's office. Singing and praying continued until they returned with good news: the Congressman had agreed to vote for the Voting Rights Bill without amendment!

Recordings from the event will be played on KNON's "Workers Beat" program, 8-9 AM Wednesday, July 19, on 89.3FM or www.knon.org 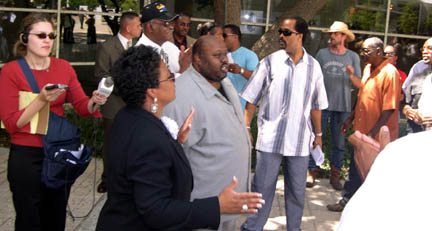