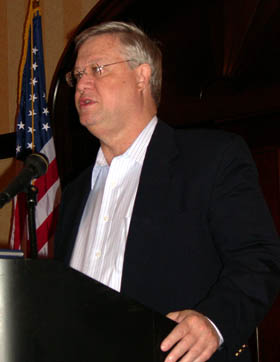 Jim McCasland, Financial Secretary Treasurer of the Dallas AFL-CIO, kicked off the 2005 Labor Day breakfast at 9:30 at the unionized Sheraton Grand Hotel in Irving. The Grand Ballroom was filled with representatives of union locals. CWA 6215 was outstanding for buying the most tickets, McCasland said.

Sister Becky Moeller of the Texas AFL-CIO provided a rundown of events since the previous Labor Day. The legislative session and two special sessions had been of great concern to all Texans, but Moeller said that they hadn't turned out as bad as they might have.

Moeller also talked about the effect of the recent disaffiliations of three big intrnational unions and the more distant disaffiliation of the carpenters union. She said that the national AFL-CIO had chan

ged its earlier decision and was now allowing union locals to affiliate at the state and council levels even though their internationals had left the federation. In spite of all formal decisions in the labor movement, Moeller asserted, as labor leaders continue to assert, that they are looking for more ways to work together.

A good example of union solidarity was evident when Sister Angela Johnson of the United Food and Commercial Workers took the podium to thank everyone for a very successful rally against Wal-Mart's labor practices just a week earlier. Her union had disaffiliated at the national level, yet the Dallas AFL-CIO unions turned out in support of their downtown Dallas rally.

Another good example occured when the Rodney Breaux was introduced. He is the labor liaison to United Way from New Orleans, and he described the recent tragedy there. Brother McCasland said that he tries to make sure that labor's activities do not have extra fund-raising added on, but that Sister Aimee Bolender of Alliance/AFT suggested that a collection was in order. Union members responded with a will, and Brother Breaux was handed over $2,000 as the meeting came to a close.

A number of union members went from the AFL-CIO Breakfast to the Dallas County Democrats' lunchtime picnic in the Food and Fiber Pavillion of Fair Park. For more photos, click here. 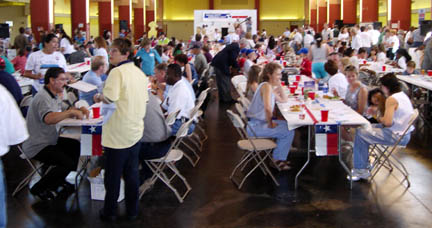