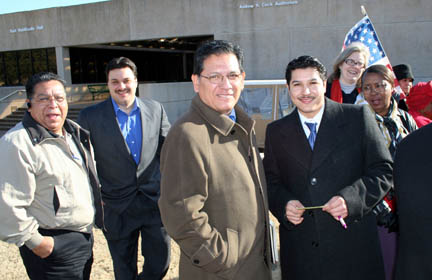 STANDING TOGETHER: (left to right) members of UFCW, UNITE-HERE, Representative

North Texas organizations, including Jobs with Justice, turned out to confront another challenge on the immigrants rights front on February 1. Republican legislator Jerry Madden had called a joint committee hearing. The ostensible purpose was to look into closer cooperation between Texas law enforcement agencies, but the language he used sounded a lot like what reactionaries in Irving and Farmers Branch have been saying: "Since the federal government hasn't acted... we must take things into our own hands..."

Leaders of the ACLU of Texas, MALDEF, Dallas Peace Center, religious organizations, unions, ACORN, and others gathered at UTD on the morning of the hearing. LULAC organized a press conference. Speakers were very reserved and reasonable. Expectations of big rowdy demonstrations and police in riot gear did not materialize. Even the John Birch Society, which was allowed to distribute literature inside the building, did not seem to have any following or, for that matter, any existing roots in Texas.

The committee chairperson, Representative Jerry Madden of Plano, was accused by several people of having staged the hearings in his own district just to improve his chances of winning the Republican primary election. Reports of any success coming from the hearings were inconclusive.