Plans for May 1 Continue Forming

The Dallas Megamarch Committee met on April 24 at the Tejano restaurant, 100 Davis in Oak Cliff. Maria Dominguez opened opened the meeting and co-chaired with Rene Martinez. Martinez said the two main points were a big voter registration meeting at Texas Stadium on May 6 and the "huelga" on May 1.

Committees were set up for finances, judicial, communications, outreach, and organization. Students initially asked for their own committee, but Martinez asked them, instead, to serve on all of the committees. Nearly half of the 60 meeting participants appeared to be high-school students. 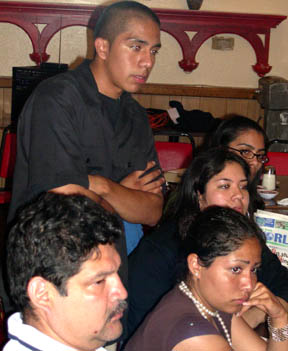 Student leaders who are becoming well-known, such as Gustavo Jimenez (shown standing) and Veronica Luciano had already begun working on voter registration plans for May 1. They worked on a rally for Kiest Park and asked people to come at 4:30 PM and stay until after dark. Everyone is to wear white and bring flashlights.

A simultaneous rally with voter registration was planned for Dallas City Hall Plaza, but there is a possibility that the site may be changed.

The web site, www.megamarch.com, was announced as a way to keep everything up. As soon as fliers are completed, they will be on that site. Volunteers can register on the site or they can call 214-941-8300.

The Communications Committee plans a press conference by Thursday noon. They are looking for opportunities to get speakers on radio and television shows.

Workers were encouraged to ask their employers for vacation time or sick time on May 1. Those who feel that they have to go to work are encouraged to wear something white. After the meeting, someone came up with the idea of putting white ribbons on our automobile radio aerials. 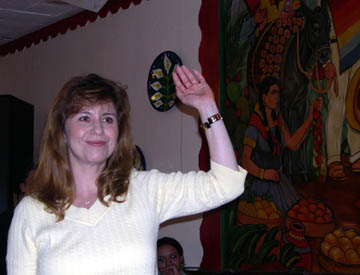 Volunteers are stepping forward as excitement about this important May 1 grows.

May 1: "No work, no buy" day. Simultaneous rallies at 4:30 PM at Kiest Park and (possibly) City Hall Plaza. Wear white

May 3 at 7 PM: Latino construction workers have a special service and reception at Our Lady of Guadalupe Cathedral