I thought the Dallas MLK march would be bigger than ever this year, because the inauguration of the nation's first African American president was only 3 days away. But the participation seemed less than usual, even though it stretched easily a mile down MLK Boulevard during the last leg. The number of onlookers, usually 3 or 4 deep all along the final mile, seemed only about half as large as usual. Possibly, being iced out last year dampened the enthusiasm for the parade. Also, the city's ever-increasing rules and restrictions may have finally choked off participation. The Elite News mass march on January 21, using only that last mile as their route, or the growing number of celebrations in surrounding cities, may have begun to displace the city's official celebration.

Jobs with Justice marched as usual. This year, we didn't have the only non-African Americans in the parade. Five student activists, all Anglos, from Denton caught up with us just after the march started. They had grown impatient with the Fair Park shuttle service and walked the three miles to City Hall, then walked back with our contingent. A good-sized group of Teamsters from Local 767, fresh with victory over Allied Waste management, marched separately through most of the event because they didn't get there in time to step off with us. Their signs reminded the thousands of onlookers that MLK was working with a sanitation workers union when he died. We waited for them on MLK Boulevard. Most of them were Latinos. The ACORN group, nearly all African Americans, were ostensibly in our contingent, but kept to themselves in order to make a bigger impression on the crowds and TV reporters.

There was a big group of Palestinians seeking help in restraining Israel's bombardment of civilians in Gaza. Right in front of us, a disorderly bunch of anglos were advertising their theory that the destruction of the World Trade Center in 2001 was actually orchestrated by the Bush government. They were handing out literature and CD's all along the route, in violation of the parade rules, and they kept walking through our contingent as they weaved in and out of the crowd and their own contingent. Reverend Ed Middleton and I were concerned that onlookers would mix us up with them, so we kept asking our leaders, Anna Middleton and Helen Rieger, two beautiful teen-agers, to maintain a "respectful distance."

The Bahai's had a tasteful and diverse presentation that showed respect for Dr. King and his message.

The 2009 parade was one of the most diverse groups in Dallas civil rights history. Participants were not only from different races, but we brought in more of the ideals that Dr. King stood for during his lifetime. We were proud to stand with him! 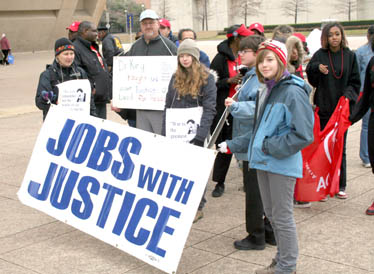 Above, our JwJ group was led by Helen Rieger and Anna Middleton (blue coats, foreground)

Below, the Teamsters made a great showing for MLK and for themselves! 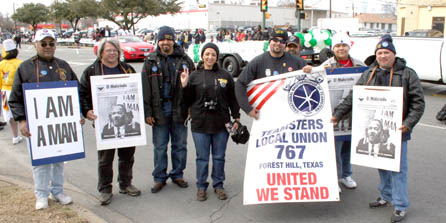