UAW Local 848's archives contain a long playing album donated by "Dusty" Rhodes. It contains a speech by Walter Reuther when he was president of the UAW and two speeches by Reverend Martin Luther King, Jr. This is a transcription of one of King's speeches made by Gene Lantz:

"Delegates and friends of UAW, ladies and gentlemen: I need not pause to say how very delighted I am to be here this evening and to be a part of this auspicious occasion.

I cannot stand here without giving just a word of thanks to this great union for all that you have done across these 25 years. You have made life more meaningful for millions of people and I am sure that America is a better place in which to live as a result of the great work that has been done by UAW. You have given to this nation a magnificent example of honest, democratic trade unionism, and your great president, Walter Reuther will certainly go down in history as one of the truly great persons of this generation.
//applause//

I bring greetings to you this evening from the hundreds and thousands, yea millions of people in the Southland who are struggling for freedom and human dignity. I bring greetings from the thousands of Negro students who have stood up courageously against the principalities of segregation. For all of these months they have moved in a uniquely meaningful orbit imparting light and heat to distant satellites. And as a result of their nonviolent yet courageous struggle, they have been able to bring about integration in more than 139 cities at the lunch counters. //applause//

And I am sure that, when historians look back over this particular era of our history, they will have to record this movement as one of the most significant epics of our heritage. Now as I think with you tonight and think about this significant occasion, I would like to open by saying "Labor has come a long long way from the days of the strikebreaking injunctions of federal courts; from the days of intimidations and firings in the plants; from the days that your union leaders could be physically beaten with impunity. The clubs and the claws of the heartless anti-labor forces have been clipped, and you now have organizations of strength and intelligence to keep your interests from being submerged and ignored. This is certainly the glorious meaning of your 25th anniversary.

Negroes who are now but beginning their march from the dark and desolate Egypt of segregation and discrimination can gain from you real inspiration and encouragement for the hard road still ahead. But though we have a multitude of problems almost absorbing every moment of our time and consuming almost every ounce of our energies, we cannot be unmindful of new problems confronting labor. And toward these problems we are not neutral because they are our problems as well.
The autoworkers are facing hard core unemployment. New economic patterning, through automation and relocation of plants is dissolving the nation's basic industries. This is to me a catastrophe. We are neither technologically advanced nor socially enlightened as a nation if we witness this disaster for tens of thousands without finding a solution. And by a solution I mean a real and genuine alternative providing the same living standards and opportunities which were swept away by a force called progress. But which for many is destruction. The society that performs miracles with machinery has the capacity to make some miracles for men if it values men as highly as it values machines.

And this is really the crux of the problem. Are we as concerned for human values and human resources as we are for material and mechanical values? The automobile industry is not alone a production complex of assembly lines and steel forming equipment. It is an industry of people who must live in decency with the security for children, for old age, for health and a cultural life. It cannot be permitted to become a blind monster which grinds out more cars and simultaneously snuffs out the hopes and lives of the people by whom the industry was built. Perhaps few people have kinship with autoworkers' labor as Negroes themselves, Because we built a cotton economy for 300 years of slaves on which the nation grew powerful and we still lack the most elementary rights of citizens or workers. We too realize that when human values are subordinated to blind economic forces human beings can become human scrap. Our kinship was not born however with the rise of automation and the birth of your organization as you confronted recalcitrant antagonists you forged new weapons appropriate to your fight.
Thus in the 30s, when industrial unionism sought recognition as a form of industrial democracy, there were powerful forces which said to you the same words we as Negroes hear now: "Never. You are not ready. You are really seeking to change our form of society. You are reds. You are troublemakers. you are stirring up discontent and discord where none exists. You are interfering with our property rights. You are captives of sinister elements who would exploit you." Both of us have heard these reckless charges. Both of us know that what we have sought was simple basic needs without which no man is a whole person.
In your pursuit of these goals during the middle thirties you creatively stood up for your fights by sitting down at your machines, just as our courageous students are siting down at lunch counters across the South. And they screamed at you. //applause//

They screamed at you and said that you were destroying property rights. But nearly thirty years later the ownership of the automobile industry is still in the hands of its stockholders and the value of its shares has multiplied many fold, producing profits of awesome size. And we are proudly borrowing your technique. And though those same old and tired threats and charges have been dusted off for us we doubt that we shall collectivize a single lunch counter or nationalize the consumption of sandwiches and coffee. //applause//

Negroes need the same measures. Even more desperately for so many of us earn less than one dollar and twenty five cents per hour.

Simple logic therefore puts us side by side in the struggle for all elements of a decent standard of living. As we survey the problems of labor from the chilling threat of automation to the needs of housing and social welfare generally we confront the necessity to have a Congress responsible to liberal legislation. And here again the kinship of interests of labor and the Negro people expresses itself. Negroes need liberal congressmen if they are to realize equality and opportunity. The campaign to grant the ballot to Negroes in the South has profound implications. From all I have outlined it is clear that the Negro vote would not be utilized in a vacuum. Negroes exercising of free suffrage would march to the polls to support those candidates who would be partial to social legislation. Negroes in the South whether they elected white or Negro congressmen would be placing in office a liberal candidate, if you will a labor candidate. No other political leader //applause//

No other political leader could have a program possessing appeal to Negroes and these circumstances the campaign for Negro suffrage is both a fulfillment of constitutional rights and a fulfillment of labor's needs in a fast changing economy.
And therefore I feel justified in asking you for your continued support in the struggle to achieve the ballot all over the nation and in the South in particular. We the Negro people and labor, by extending the frontiers of democracy to the South inevitably will sow the seeds of liberalism, where reaction has flourished unchallenged for decades. A new day will dawn which will see militant, steadfast and reliable congressmen from the South joining those from the northern industrial states who design and enact legislation for the people rather than for the privileged.

Now I need not say to you that this problem and all of the problems which we face in the nation and in the world for that matter will not work itself out. We know that if the problem is to be solved we must work to solve it. Evolution may be true in the biological realm but when we seek to apply to the whole of society there is very little evidence for it. Social progress never rolls in on the wheels of inevitability it comes through the tireless efforts and the persistent work of dedicated individuals. Without this hard work time itself becomes the ally of the insurgent and primitive forces of social stagnation.
So in order to realize the American dream of economic justice and of the brotherhood of man, men and women all over the nation must continue to work for it.

There are certain words that are used in every academic discipline and pretty soon they become a part of the technical nomenclature of that discipline. Modern psychology has a word that is probably used more than any word in modern psychology. It is the word "maladjusted". This is the ringing pride of the new child psychology "maladjusted" now certainly all of us are desirous of living the well adjusted life in order to avoid the neurotic and schizophrenic personalities, but if you will allow the preacher in me to come out now, let me say that there are things within our social order to which I am proud to be maladjusted and which I call upon you to continue to be maladjusted //applause//

It may well be that the salvation of our world lies in the hands of the maladjusted. So let us be maladjusted. As maladjusted as the prophet Amos, who in the midst of the injustices of his day could cry out in words that echo across the centuries, "Let judgment run down like waters and righteousness like a mighty stream".

As maladjusted as Abraham Lincoln who had the vision to see that this nation could not exist half slave and half free. As maladjusted as Thomas Jefferson who in the midst of an age amazingly adjusted to slavery could cry out in words lifted to cosmic proportions, "We hold these truths to be self evident, that all men are created equal, that they are endowed by their creator with certain unalienable rights." //applause//

So we must continue to struggle for economic justice, the brotherhood of man, with the conviction that there is something in this universe which justifies Carlisle in saying no lie can live forever. There is something in this universe which justifies William Cullen Bryant in saying "truth crushed to earth will rise again." And there in this universe which justifies James Russell Lowell in saying "truth forever on the scaffold, wrong forever on the throne, yet that scaffold sways the future. This is our hope, this is the faith that will carry us on. And if we will stand by this and continue to work for the ideal, we may be able to bring into being that new day. This will be the day when all of God's children, black men and white men, Jews and gentiles, Protestants and Catholics will be able to join hands and sing anew with the Negro slaves of old: "Free at last, free at last, thank God almighty, we are free at last!" //applause// 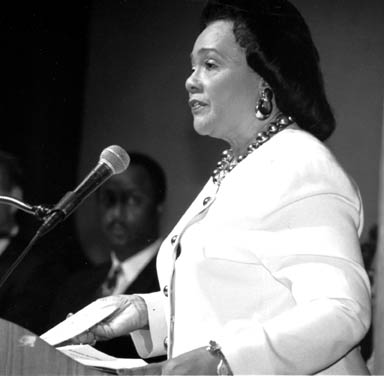 UAW 848 photographer Jay Dunn took this shot of Corretta Scott King during a visit to Dallas.