The North Texas organizer for the National Nurses Organizing Committee, Richard Stephens, reports that hospital administrators are increasing the pressure against nurses who organize for patient safety and decent health care. The Interim President, Rossia Avery, has been charged and is under threat of firing. Avery is a popular 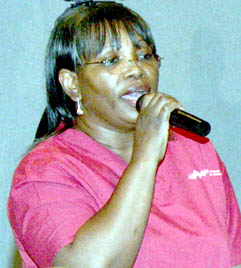 speaker anywhere in North Texas where people are concerned about their health care. She has appeared on the KNON "Workers' Beat" program twice, and has spoken at a number of union meetings and retiree meetings. Her open sincerity and devotion to her profession have won her legions of friends and supporters all over North Texas.

Stephens says that there are other firings, denials of employment benefits, and constraints on the NNOC's local leaders. There are two basic reasons;

1. Faced with hospital administrators' constant cost cutting and lowering of standards, nurses are standing up for themselves for the first time ever.

2. The targetting of NNOC leaders like Rossia Avery indicates that hospital administrators are getting together to oppose their nurses and any health care reform.

The three nurses fired in Mesquite in May, Nancy Freizen, Diana Sepeda, and Sandra Taylor expected to return to new jobs in Denton next week, but they received "do not return" notices, Stephens said. Apparently, none of the nurses has had to suffer significant reductions in their incomes, but that is only because they are top qualified people with many sincere friends in the health care business.

Meanwhile, nurses continue to report unsafe conditions to the NNOC, and some of them would make listeners shudder. The NNOC is not attempting to throw dirt on the industry or put any facility out of business. They are just trying to organize the nurses to improve their jobs and all health care. Stepehns says, "It is time for all of labor to stand together and say this is enough." Nurses are making plans for public responses to the vicious tactics of reactionary hospital administrators who are resisting any kind of health care reform. Stephens says, "I need suggestions from every one. Need help and man power for the picket lines. I need any and all help from any and every one that can take part in this. it is a crime that this is happening in America." Click here to volunteer or call (817) 437-0038.

North Texas Jobs with Justice, which made common cause with the National Nurses Organizing Committee months ago, will be distributing health care literature and asking for volunteers over the Labor Day weekend. The National AFL-CIO, on August 29, released a statement declaring that health care reform is labor's number one domestic issue.