Your Help is Needed to Save Civil Liberties

North Texas activists are rallying around the defense of the Holy Land Foundation during their trial at the Earle Cabell Federal Building in downtown Dallas. The case is one of several that traces its roots to the anti-Muslim hysteria created by the Bush Administration after the 9/11 disaster. For details on what has happened in this very important trial, go to the Hungry for Justice or Freedom to Give web page. The government charges the Holy Land Foundation, which was the largest Muslim charitable organization in the United States before it had its assets seized by the government in 2001, with aiding terrorism. The defenders say that they were helping those in need, which included the long-suffering people of Palestine as well as other victims of oppression such as the survivors of the Oklahoma City bombing.

The Dallas Peace Center's Board of Directors has joined the "Hungry for Justice" coalition to call for justice. Their Executive Director, State Representative Lon Burnam, released this statement: "We are concerned that these are trumped up charges being used to harass a legitimate nonprofit organization. We want to do all we can to make sure that these people receive a fair trial." 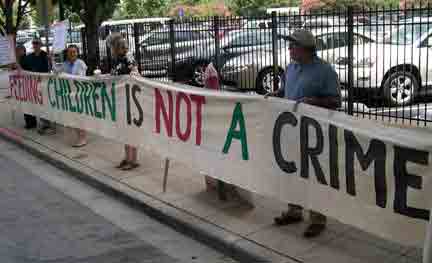 On trial days, a group of supporters gathers outside the Federal Courts Building on Commerce Street from 11 AM to 1 PM Monday through Thursday. Their signs and banners proclaim, "Feeding Children is Not a Crime!" They encourage everyone to come down and find out about this very important legal process.