Gobblelization with Oman is Next

Leslie Ramsey of Fair Trade Watch in Austin is spreading the alarm that the United States is attempting to ram through yet another of the so-called "free trade" deals. The object this time is the oil-rich Middle Eastern country of Oman. She urges everyone who sees through these thinly-disguised anti-worker, anti-environment secret investment deals to call their congressperson and oppose it.

NATIONAL SIGN-ON LETTER AGAINST OMAN FTA
The Citizens Trade Campaign is circulating the attached sign-on letter to send to members of Congress at the end of the Memorial Day recess . It's important that we get as many groups from Texas onto this letter as we can.

Working hard for the cause... Lesley

Dear Representative/Senator:
On behalf of the millions of Americans we represent, the undersigned religious, labor, human rights, consumer, environmental, and family farm organizations urge you to oppose the U.S.-Oman Free Trade Agreement (OFTA).

After a contentious battle last July, CAFTA passed the House of Representatives by a single vote. Unfortunately, OFTA is nearly word-for-word identical to CAFTA.

Like NAFTA and CAFTA, OFTA fails to include any meaningful labor and environmental protections. The lack of effective labor provisions in OFTA is particularly significant in light of the recent New York Times article revealing massive labor abuses in Jordan-a nation with which the United States has a free trade agreement.[1] <#_ftn1> These violations include widespread human trafficking, 20-hour workdays, and widespread failure to pay back wages. More troubling is the fact the Oman FTA contains weaker labor provisions than the Jordan FTA.

While, current Omani law does not come close to meeting core International Labor Organization (ILO) standards, members of the Ways and Means Committee have been trying to encourage the Sultan of Oman to bring his nation's laws into compliance. However, as evidenced by the five-year record in Jordan, when foreign "guest workers" comprise much of the labor force-and do not speak the language, changing domestic laws is not sufficient to ensure that workers' rights are respected. Sweatshop conditions with our trading partners mean more lost jobs in the United States.

In addition, as with other recent FTAs, the Oman agreement fails to ensure that a country is obligated to implement provisions of key international environment agreement such as the Convention on International Trade in Endangered Species (CITES).

OFTA also stands to unnecessarily harm the sick and the poor. It includes unprecedented monopoly rights for large pharmaceutical corporations that extend beyond the data exclusivity protections many in Congress opposed in CAFTA. These additional protections provided in OFTA effectively forbid generic competition for extended periods and would further limit access to affordable medicines.

OFTA also extends extraordinary foreign investor protections and rights beyond those provided in CAFTA (which in itself expanded on the NAFTA rules that resulted in 41 foreign investor challenges to U.S. health, environmental and other policies with over $35 million in government funds paid in damages to date). OFTA would expose many U.S. government decisions about federal contract, lease or concession agreements by granting increased rights to foreign investors. The new OFTA-covered areas subject to such challenge include more natural resource contracts (such as exploration, extraction, refining, transportation, distribution, or sale); services contracts (such as power generation or distribution, water treatment or distribution, or telecommunication); and infrastructure projects (including construction of roads, bridges, canals, dams, or pipelines).

By opposing the U.S.-Oman Free Trade Agreement, Congress will send an important message to the American people and to the world: most Americans desire a new U.S. trade and globalization policy that will lift standards of living and promote connections between countries that foster goodwill, fairness, and prosperity for all. 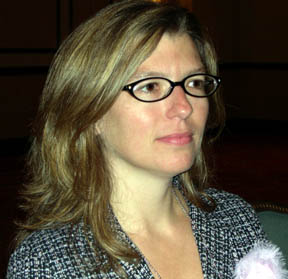 Lesley Ramsey at the Texas AFL-CIO COPE Convention May 9