Dallas, and I, Remember Pancho Medrano

A long list of dignitaries spoke on November 4 at the dedication of the Pancho Medrano post office on Ferguson Street in East Dallas. Congresswoman Eddie Bernice Johnson, who initiated federal legislation to honor Medrano, cried as she recalled her lifelong friendship with Medrano. In the big 350-strong audience full of political and civil rights activists, many of us re-assembled our own memories.

The first political act I ever did in Dallas was to help organize a rally to defend gays in 1978. It was my job to find a speaker from organized labor. In 1978 in Dallas, I was skeptical that any union leader, or even any union member in Dallas, would speak up for the rights of homosexuals, but I was wrong. Pancho Medrano agreed as soon as I called him, and he did a fine job at the rally. 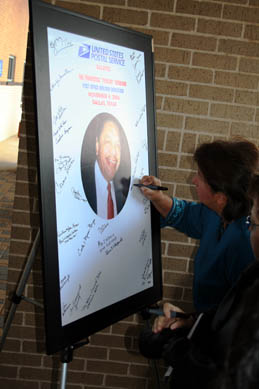 Medrano was an International Rep for the United Auto Workers. During the 1950s, International President Walter Reuther had picked Medrano, already well known in Dallas as a heavyweight boxer, union man, and a builder of progressive coalitions, to represent the union in civil rights activities. In one particular way, Pancho was head and shoulders above other leaders of his time, who tended to be nationalists devoted only to their own ethnic group. Pancho worked for everybody's civil rights.

I didn't know, until Pancho himself told me, about the many historic moments he had shared. From Montgomery to Delano, Pancho was there. He saw Bobby Kennedy get shot, and he defended Ladybird and Lyndon Johnson from a mob in Dallas. He marched with Cesar Chavez and with "Tiger" Tijerina.

Even though it would be hard to figure out which of Pancho's many contributions was most important, one nominee comes to mind. In 1974, he was the lead plaintiff in a successful case against the infamous Captain A. Y. Allee and the Texas Rangers. The Rangers were accused of excessive force against the Farmworkers in the Rio Grande Valley. Pancho and others were roughed up, but they used the occasion for a legal case that must have had a big role in ending the Ranger's shameful history of racism and union busting.

I was fortunate, in 1979, to go to work in Medrano's old aircraft plant and to join his old union local. His son, Frank, usually called "Pancho Jr," was active there. My first union activity was to campaign for Frank's election as Vice President. As I began to take on more and more writing duties for the local, I interviewed activists and retirees for the union newspaper and archives. I interviewed Pancho and Frank several times. It was easy to find them, because they were at progressive events that I attended, which were many. In 1983, Frank got the local to pay for a Jobs with Justice bus to Washington DC to celebrate the "I Have a Dream" speech by MLK. Both of UAW 848's Medranos made the trip.

Pancho never missed the annual Martin Luther King parade. From 1990 on, I helped organize union contingents. Even after Pancho aged too much to make the entire march, he would join us for the last half mile or so, and march past the bandstand with the unionists. I recall that the announcers would forget the name of our Jobs with Justice contingent and just say, "And there's Pancho Medrano!" There was a lot of applause, including from us marchers.

One of my prized photos shows Pancho, arms extended like Zorba the Greek, dancing with happiness on Ross Avenue. The American union movement had finally reversed its disastrous policy against immigrants' rights, and we were marching to show our newly-approved solidarity with all workers.

Another time, we had a rally for Governor Ann Richards at the MLK Center in Dallas. She started her speech, then interrupted herself: "Hey, there's Pancho Medrano out there! Hello Pancho!" I understand that he was on such friendly terms with people much higher than governors. 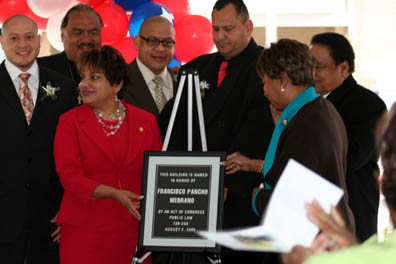 I often wish that the people who benefited from Medrano's activism had appreciated him more when he was alive. Even his sisters and brothers in the union movement could have done much more. He worked hard in politics, in civil rights, and in union building, as did Frank until his untimely death around 1990. Pancho "Senior" attended the March, 2002, retirees' luncheon at his old local, where I photographed him for the last time. Right after that, even though deathly ill, he rose up to vote in the primary election. A few days later, April 4, we lost Pancho's physical presence, but not his inspiration.

Among Pancho's offspring are a present and former Dallas School Board member and a present and a former City Council member, all in this photo with the Congresswoman