Hadi Jawad facilitated a meeting at the Dallas Peace Center on the evening of March 12. About fifteen people attended. One of them was Detective Hill of the Dallas police. He was there to make sure that protests were smooth and legal when North Texans protest the anniversary of the invasion of Iraq on March 19. Final approval for the activity was set for the following Wednesday, but Detective Hill indicated that he expected no problems.

The general plan is to gather in the parking lot by the Mockingbird DART Station, Mockingbird & Hiway 75, at 4:30 that afternoon. As soon as everybody has arrived, a march is planned for a few blocks west on Mockingbird, then one block north on Airline to Potomac Park. The park is behind the little strip mall just west of Mockingbird and Central Expressway.

Youthful activist Beth Freed had already done a great deal of work on this activity. The Dallas newspaper had alloted some early publicity, and Freed had been giving out leaflets to all activists. 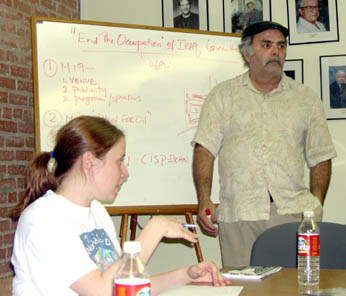 placing of a George Bush ideological "think tank" on the SMU campus. Potomac Park is involved in the construction plans. Methodists have an important hearing on March 14 about the SMU plans. Liz Parker said that she would work with students and other progressive forces on the campus.

An interesting discussion ensued about who would speak at the rally in Potomac Park. One one side were those who felt that any restrictions would tend to muffle dissent and rob the movement of creativity. Others were for restrictions on the basis that the war and the Bush "think tank" were the main issues and that the commercial media inevitably features words and actions that do not represent our purpose. As always, Hadi Jawad guided the group toward a satisfactory solution.

The group also discussed the "Blood for Oil" program at the Peace Center March 19 and the bus to the Austin peace march on March 17. The Committee in Solidarity with the People of Iran announced an activity at the Dallas Federal Building on April 7. The Tarrant County Peace Action Committee plans a peace demonstration on Sunday, March 18. Check www.dallaspeacecenter.org and www.dallasrally.org for updated information.

Beth Freed and Hadi Jawad at the Dallas Peace Center