Peace activists held protests, vigils, marches, and rallies all over Texas during the weekend of March 17-19. Houston had a march in suburban The Woodlands, a vigil for veterans, and three religious services for the war dead. A march for economic justice on March 24 will also feature the economic ruin brought about by Bush's invasions and occupations. It starts in Hermann Square at noon. Austin had a statewide rally on March 17. 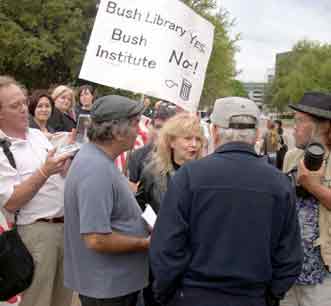 Fort Worth had at least two rallies. Arlington had at least one. Dallas peace activist had a special blood donation benefiting the Veterans' Hospital. Donors were given a symbolic pint of motor oil for the pint of blood. There was a vigil downtown at the Kennedy Memorial and, at the same time on the evening of the 19th, a major march and rally that ended in a tiny vacant strip of land next to the football stadium at Southern Methodist University. The site is said to be the location for the library, museum, and partisan think tank planned to continue GW Bush ideology after he retires from office. Dallasites, especially those associated with the university, strongly oppose the Bush plans.

Using their auto horns and the "thumbs up" sign, passers by at peace activities show their increasing agreement with peace activists.

The fight at SMU started when two university teachers wrote an op-ed in the campus newspaper. Later on, the opposition became much larger and more focused when the university president let it be known that the Bush Administration was insisting that they had to adopt a "whole package" of Bush library, Bush museum, and a Bush "Think Tank." The think tank, sometimes called "Bush Institute," would be an unprecedented trespass of a partisan organization onto property where academic freedom is supposed to mean something.

As seen in the accompanying sign, the campus opposition decided to stop fighting the library and museum so that they could concentrate on the much greater threat of a partisan think tank using their good name and academic credibility into the unforseeable future. Further explanation is scheduled to play on KNON's "Workers Beat" program 8:05-9 AM on 89.3 FM or www.knon.org.

"…Iraq posed no threat to the territory or people of the United States, yet the 2003 invasion of Iraq has resulted in the deaths of more than 3,200 American soldiers and a reported 59,000 Iraqi civilians…"

"…the United States has been embarrassed by revelations of torture and abuse of prisoners at Abu Ghraib, and evidence suggests that President Bush has authorized the use of similar acts of torture in the interrogation of detainees in American facilities around the world…"

"…The Bush Administration's breaches of law are not limited to international affairs, having similarly violated the public trust by suppressing scientific information and altering government documents relating to the causes and effects of global warming with the intention of deceiving the American public…"

On March 23, the U.S. House of Representatives passed a bill that would limit the time that American occupation forces can stay in Iraq.

Peace March in The Woodlands - Saturday, March 17
The Lone Star Democratic Club has organized this event. Meet at the Peace Palace, 10210 Grogan's Mill Rd. at 2 p.m. Participants will walk to Market Street, have some coffee or a bite to eat, and then walk back to the Peace Palace. For more information, contact Karen Moeck, 281/419-8965 or Tomi Phillips, 281/292-1652.
Commemoration of the war dead - Sunday, March 18 - Sunday, March 25

Once again Veterans for Peace Chapter 12 and Military Families Speak Out will place flags bearing the names of all the U.S. war dead, plus honor the Iraqi casualties with an appropriate symbol. The location will be Strawberry Park in Pasadena, which is just north of Spencer Highway and a bit east of S. Shaver Rd. Volunteers will be needed on the first and last days for help setting up and dismantling the display. For more information and to volunteer, contact Jim Rine, 281-414-1386, sanjacsec@yahoo.com.

Live Oak Friends Meeting is having a memorial vigil and silent prayer from 5-8 p.m. at the meeting house, 1318 West 26th in the Heights between N. Shepherd and Ella. For more information, contact Victoria Albright, 713/699-8424.
Candlelight vigil - Monday, March 19
Honor the sacrifice. Stop the escalation. Bring the troops home. 5 p.m. at 1817 State St. corner Sabine in the old sixth ward. The location is 4 blocks south of Washington. State St. enters Houston Ave. just north of Memorial. This is a moveon.org meet-up. For more information, contact Jay Hamburger, veggieburger@houston.rr.com.
Freeway blogging - Tuesday, March 20
The goal is to have a presence on five bridges over US 59 South. It is hoped that various groups will volunteer for different bridges. Official start is at 6 p.m., but 4:30 p.m. is welcome (to catch rush hour traffic). Don Cook is coordinating the project. Contact him at zenblews@hotmail.com. He'll send you a copy of an HPD internal directive from former Chief Sam Nucchia to ward off any cops that may hassle you.
Labyrinth Walk for Peace - Wednesday, March 21
Rev. Jeremy Rutledge, minister at Covenant Baptist Church, will lead this meditation. 6 p.m. in front of the church, 4949 Caroline St. in the Museum District.
March for economic justice - Saturday, March 24
Houston Coalition of Working People and the Poor has called this major march and rally to advance its 2007 agenda: raising the federal minimum wage, healthcare for all, and adequate funding of human needs programs, especially the critical entitlement programs that are up for re-authorization this year-Food Stamps and State Children's Health Insurance Program (SCHIP). It's important that middle-class Anglo activists stand with people of color for the issues that matter most in their lives. Plus, the struggle for new budget priorities connects peace and economic justice in the most meaningful way. Gather at noon in Hermann Square (in front of Houston City Hall). The short march kicks off at 1 p.m., then the rally begins at 1:45 on the City Hall steps. For more information, contact Angel Cade, 713/688-2900x223, angelc@clearsail.net.

On the fourth anniversary of the Iraq War, the Dallas Peace Center plans to call attention to the heartbreak of carnage wrought for corporate gain, and the hypocrisy of an administration that freely sends young people to war, yet tightens its purse-strings when those soldiers return physically and emotionally devastated.

The Peace Center will hold a "Blood for Oil" blood drive from 11:00 a.m. to 2:00 p.m. on March 19 at 4301 Bryan St. Each donor will receive a quart of oil from the Peace Center, and their donation will be directed to the Veterans Administration Hospital in Dallas.

"To date, almost 3,200 U.S. military personnel have lost their lives in a war that the administration is floundering to find a reason for. Conservative estimates put the number of Iraqi deaths at 60,000. The only beneficiaries of this war are corporate interests, and the American people are finally beginning to realize this," said Dallas Peace Center Executive Director Lon Burnam. "Our soldiers are spilling their blood for oil."

Almost 24,000 Americans have been wounded in the Iraq War. The Washington Post reported on March 6 that "Army studies have found that up to 30 percent of soldiers coming home from Iraq have suffered from depression, anxiety or PTSD [Post Traumatic Stress Disorder]. A recent study found that those who have served multiple tours are 50 percent more likely to suffer from acute combat stress." Yet the President seeks to cut VA funding in 2009 and 2010, and freeze it thereafter, at the very time when Iraq vets will need treatment most, and VA clinicians will need training to deal with a burgeoning number of patients.

Those who would like to participate in the "Blood for Oil" blood drive may sign up for a time slot by calling Daniel at 214-823-7793. Attached to this Press Release is a photo of the quart of oil donors will receive.
Dallas Peace Center

"Blood for Oil" Blood Drive
More than 3,200 U.S. military personnel have given their lives in a war being fought because of the avarice of a few.

More than 32,000 have been wounded, and many will seek care VA hospitals as the president seeks to cut VA funding.

Call attention to this hypocrisy by giving your blood for oil.

Donate blood to be directed to the Dallas VA Hospital, and receive a quart of oil.

4:30 p.m.
End the War in Iraq March
Demonstrators will meet in the parking lot adjacent to the Mockingbird DART rail station.

From there, the group will march westbound on Mockingbird to the strip mall at Mockingbird & Airline Rd., which is part of the proposed site for the future Bush library, policy institute and museum.

Following the demonstration, participants will head to Potomac Park, located directly behind the strip mall. Musicians, poets and speakers will perform at an open mic event, and tables will be set up for artisans and activists to present their wares.

Sunday, March 18, 4:00 p.m.
Stand For Peace - Arlington
Activists are encouraged to bring signs with a positive, pro-peace message to Lincoln Square, near the TGI Friday's, and on the Collins Street I-30 overpass. To find out more, visit www.arlingtonpeace.org.

Monday, March 19
Impeachment Resolution to be introduced in Texas State House
Dallas Peace Center Director and State Representative Lon Burnam will introduce a bill calling for the impeachment of President George W. Bush. Contact your state representative about this or any other resolution. (Find contact information by clicking the blue "Find Your Elected Officials" box on the Dallas Peace Center home page.)

…and regular meetings
hursday, March 15
Women in Black
Women in Black will stand in front of the Federal Building at 207 S. Houston St., which houses a U.S. military recruitment office. Women in Black is an international network of women activists that challenges violence and occupation as a viable approach to conflict resolution. Call 214-823-7793 for correct time. Wear black.