On July 30, television news showed horrible deaths in Qana, Lebanon, due to Israeli warplanes. The Dallas Peace Center had already called for a march beginning at Ferris Plaza, in front of the Dallas Morning News office. More than 300 people turned out for a silent, non-political march through the streets of downtown. There were no banners, signs, nor chants. No one blamed anybody. Simple white flags were the only displays. Everyone from all sides was invited.

The turnout was one-sided, if not totally for Lebanon. Some of them brought Palestinian flags, but they furled them and left them in the plaza during the march. I counted 243 when we stepped off, but 302 when we were close to finishing the route. I noticed another family arriving even after the march was over. 3 television stations covered it to the satisfaction of organizers, but the big Belo print media giant ignored it, even though the staging area was across the street from their office with the big etched slogan about being dedicated to the truth.

We marched through the Texas heat for an hour in a circular route that brought us back to the cool fountain at Ferris Plaza. We hugged one another and promised to return. Israel announced a cessation of violence, but resumed bombing the next day. Hezbollah in Lebanon sent rockets into Israel. 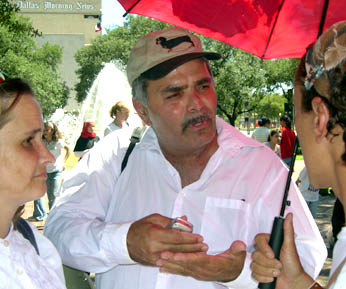