Northaven United Methodist Church hosted the first stop for one of the three busses going from Crawford to Washington DC by way of the rest of the United States. On August 31 we packed the sanctuary to hear five speakers with loved ones at risk of going to Iraq, already gone to Iraq, or already killed in Iraq.

The Reverend Eric Folkerth introduced Sergio Torres, whose son was killed in January. His sister, Beatriz Saldivar, also talked about Sergeant Daniel Torres. She said that her nephew had opposed the war and felt it was especially unfair for soldiers to be assigned multiple combat tours. "We are in there for no purpose, attacking the wrong people!" Beatriz affirmed.

Hart Vigis, a combat veteran now speaking for Iraq Veterans Against the War, read a letter from a soldier still in Iraq Kelissa Stanley's husband is just starting his second combat tour. She explained, "He is fighting for the lusts and the desires of George W Bush!"

Mia Lorraine' son is a Captain in Iraq. Like other speakers, she talked about the topic of atomic warfare by saying that the radioactive weapons being used in Iraq are putting Americans at risk and destroying the country there. Vince George, like Mia Lorraine and Kelissa Stanley, represented Military Families Speak Out. His brother is in the national guard, as, he said, 40% of the 145,000 American troopers in Iraq. He denounced the use of depleted uranium in weapons: "There is a nuclear war going on in Iraq, and we are poisoning our own soldiers!" He urged everyone to work in the 2006 elections and predicted, "If the House turns, the president will be impeached for war crimes." 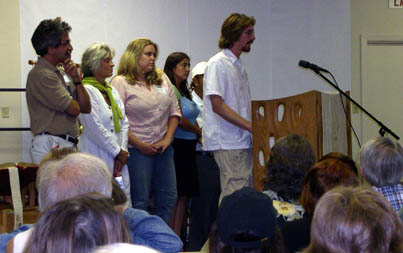 At each tour stop, the speakers hope to raise enough money to continue until they come to Washington DC for the mighty demonstrations of September 24. North Texans contributed to that end, even though a great deal of their budgets had already gone to hurricane relief. The audience divided into two groups: one to plan a local action, the other to get people to Washington DC for September 24th. 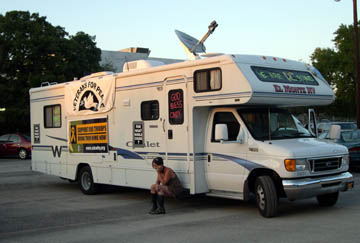 The Tour will continue until September 24, when they will participate in the anti-war march in Washington DC