For years, activists have rightfully complained that Martin Luther King Jr celebrations do not properly reflect the life and ideas of this great American. One sore point in Dallas is that Junior Reserve Officer Training (JROTC) drill teams carry rifles in the main event that celebrates the life of this famous pacifist. In 2006, Peter Johnson asked progressive organizations to stay out, and some of them, most notably the Dallas Peace Center, did.

A similar problem was going on in San Antonio, where they proudly march in the world's second largest MLK celebration every year. In 2006, the committee organizing the event decided to invite military warplanes to do a "flyby." Activists were outraged, but the latest information received said that they did not boycott. 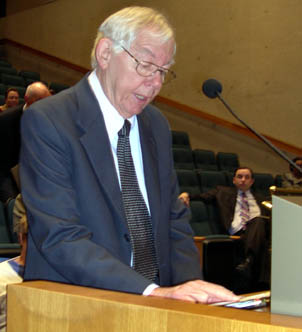 Peace activists went to the Dallas City Council on January 11 to plead with them to ban firearms from their January 14 march and parade. Highly respected activist Bill McLemore was one of the speakers who read parts of King's famous April 4, 1967 public declaration against the Vietnam War.

City Councilmen listened politely. One of them gave the opinion that he would like to see a march next year with fewer aspects of a parade. Mayor Miller commented that she would like to combine the City's event with the one organized by a local newspaper.

On Saturday morning, the Dallas newspaper ran an account of Peter Johnson's appearance before the City Council along with a good photo. The article did not mention his call for a boycott. 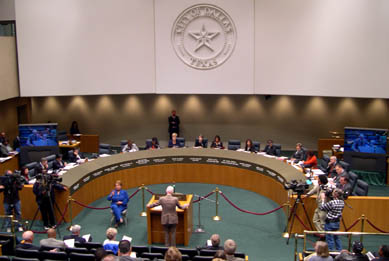 In fairness, there are two sides to the argument. High schools may be just as proud of their JROTC units as they are of their bands. Minority students may have a considerably different view of military careers than the predominantly Anglo peace activists, because they tend to have fewer economic opportunities. It has been said that some of the JROTC students' uniforms are the best clothes they ever had. It might also be argued that the significance of the MLK celebrations goes far beyond the particularities of who marches and who doesn't. The biggest argument about the boycott, though, was whether or not it would do more harm than good. 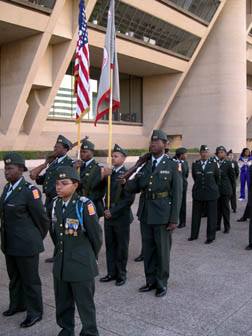 When the Dallas Martin Luther King March and Parade stepped off at ten AM that Saturday, JROTC drill teams still had guns, and there were no activists from the Peace Center to remind the thousands of viewers that Dr. King had taken a courageous and historic stand for peace.