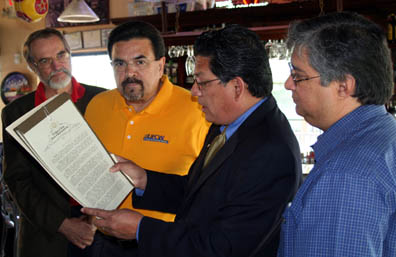 State Representative Roberto Alonzo was able to get the Texas House of Representatives to honor Cesar Chavez in time for his birthday March 31. At the Cesar Chavez breakfast, he read the resolution aloud and presented copies to Gene Lantz of Jobs with Justice, Johnny Rodriguez of LCLAA, and Jerome Garza of the Dallas School Board.

The text of the resolution is below:

H.R. No. 133
RESOLUTION
WHEREAS, Americans across the country are pausing on March 31, 2007, to pay tribute to the inspiring life and achievements of Cesar E. Chavez, founder and longtime leader of the United Farm Workers of America (UFW), AFL-CIO, on the anniversary of his birth; and
WHEREAS, Born in 1927 near Yuma, Arizona, and later raised in California, Mr. Chavez spent much of his youth as a migrant laborer; as a Latino and a farmworker, he learned firsthand about the indignities of second-class citizenship and the unhealthy working and living conditions endured by those who tended the fields; and
WHEREAS, After serving in the u. S. Navy from 1944 to 1946, Cesar Chavez returned to California, and in 1948 he married Helen Fabela; four years later he became a community organizer for the Community Service Organization (CSO), a Latino civil rights group that focused most of its work in urban areas, and by the late 1950s he had become its national director; and
WHEREAS, When in 1962 the CSO declined to organize California farmworkers, Mr. Chavez and his colleague Dolores Huerta left the organization to found the National Farm Workers Association, a forerunner of the UFW; their fledgling union gained national prominence just three years later when it came to the support of workers who were striking California's grape growers; in addition to assuming leadership of the strike, Mr. Chavez launched a successful, nationwide consumers' boycott of nonunion grapes; and
WHEREAS, By the end of the five-year-long strike, the UFW had organized all of the California table-grape industry and negotiated the first collective bargaining agreements between American farmworkers and corporations; in 1975 Cesar Chavez and the UFW further succeeded in securing the passage of California's Agricultural Labor Relations Act, the first law in U.S. history granting farmworkers the right to unionize and bargain collectively; numerous other gains achieved under his leadership included the establishment of a farmworkers' medical plan, pension plan, and credit union, as well as the National Farm Workers Service Center, Inc., whose projects include the development of affordable housing, health clinics, cooperatives, and a retirement home; and
WHEREAS, Over the course of his life, Cesar Chavez sought to advance La Causa, the movement, through nonviolent means--through strikes, pickets, and boycotts; on several occasions he also undertook lengthy fasts to draw public attention to the farmworkers' struggle; and
WHEREAS, Mr. Chavez continued to lead the UFW until his death on April 23, 1993; more than 50,000 people from throughout the nation gathered to mourn him at his funeral, indicative of the far-reaching impact he had made on American society; and
WHEREAS, Since that time, numerous schools, streets, scholarships, monuments, buildings, and parks have been named in his memory, a number of U.S. cities have initiated annual celebrations in tribute to his life, and several states, including Texas, have declared his birthday, March 31, a state holiday; in 1994 Mr. Chavez was posthumously awarded the nation's highest honor, the Presidential Medal of Freedom; and
WHEREAS, Cesar Chavez chose to devote his life to the pursuit of social and economic justice through nonviolent means, and his courage and steadfastness in this great work brought improved health, greater security, and hope for a brighter future to countless people; now, therefore, be it
RESOLVED, That the House of Representatives of the 80th Texas Legislature hereby honor the life of Cesar E. Chavez and join the citizens of the Lone Star State in commemorating the birth of this revered American.

Alonzo
Signed as HR 133
Tom Craddick
Speaker of the House
I certify that HR No 133 was adopted by the House on February 22, 2007, by an on-record vote
Robert Haney Chief Clerk of the House