In mid-afternoon on October 5. a group of 40 or more Dallas activists gathered across the street from Reunion Station in downtown Dallas to demand that President Bush fire his own brain. Protestors told reporters that Bush had said he would fire anybody who revealed the name of a CIA spy, and it has become clear that Karl Rove did it. Rove was at the luxury Reunion Hotel raising more money for the Republican Party. 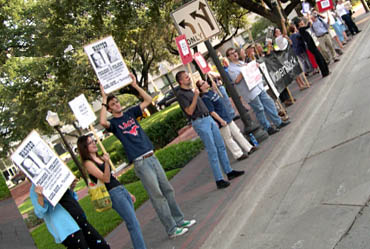 Protestors said that fat cat Republicans were paying $1,500 each to have their photos taken with Rove. They were much prouder to be photographed, for free, on the fighting side!