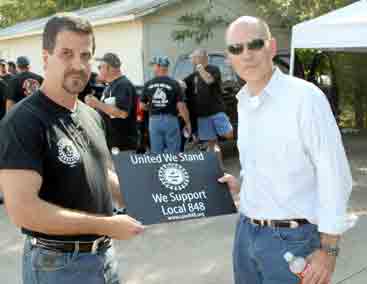 UAW 848 activist Brian Caldwell presents a solidarity sign to State Representative Kirk England. Caldwell and his volunteers have put more than 100 of these signs in local businesses that agreed to support Local 848.

A series of meetings took place at UAW Local 848 in Grand Prairie on September 25. Since Local 276 was on strike, they didn't want to hold the monthly UAW 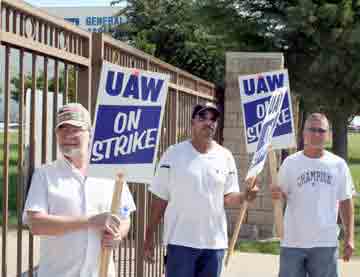 Area Retirees' Council there. 848 volunteered to host the retiree leadership council. As that meeting ended, the retirees formed a car caravan and cruised down Abrams street in Arlington to show solidarity with the General Motors strikers. They carried signs that read "Retirees for UAW!" and honked their horns to make as big a fuss as possible.

Local 848 then cranked up its second shift Contract Preparation Committee meeting for 1:30 PM. They had a good turnout of enthusiastic activists. At 4 PM, after the first shift completed their tour, another Committee meeting took place. Every UAW 848 member wore black in solidarity with the union's "Black Tuesday" program.

At the end of both meetings, activists gathered in the parking lot for a quick cookout. They were joined by State Representative Kirk England, who stayed around to talk to all of the unionists. Many of them congratulated him on his strong pro-worker voting record in the State Legislature even while he was a Republican, and congratulated him again on having switched to the Democratic Party as of September 20. That same day, Judge Creuzot also switched to Democrat, so that almost all the offices in the county are held by the Democratic Party. Back in 2004, there were only two Democrats in office.

Also at the union hall to show solidarity with Local 848 were men from Teamsters Local 745, Teamsters Local 767, and the Tarrant County local of United Transportation Union. These transportation union men had a great deal more experience with organizing, picketing, and carrying out strikes and other concerted action than the manufacturing workers at Local 848. Not only did they assure the UAW men and women that their unions never cross picket lines, they also listened to and commented on the many plans made by the Contract Preparation Committee as they get ready for their September 30 contract expiration with Vought Aircraft. 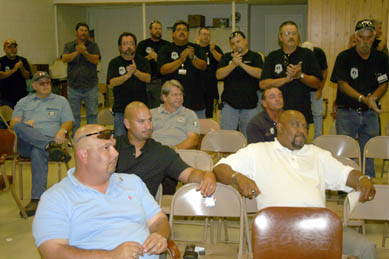 UAW 848 members gave a standing ovation to their solidarity guests: (seated from left) Ronnie Packard of UTU, Roberto Villanueva of IBT745, Rod Cuevas of IBT745, Terry Johnson of IBT767, Ira Ganious of IBT745, and Dennis Moore of IBT745. Two others were not in the photo