On March 5, women activists met at the American Postal Worker Union Hall in Dallas. Before Congresswoman Johnson arrived, they were addressed by Jean Hervey, Vice President of UNITE-HERE, about the Coalition of Labor Union Women.

Celine Johnson of P.O.W.E.R. introduced Congresswoman Johnson. She opened by stressing the importance of Social Security: "In Texas,almost 80% of the women who have reached retirement age depend solely on SS." She said that Americans were so far rejecting the Bush Administration's proposal to privatize Social Security: "It's not going over very well; that's why no real proposal has been put on the table."

Congresswoman Johnson said that Republicans had their greatest success when diverting people into worrying about same-sex marriage and abortion, but that the ruse had become less useful. On same-sex marriage, she scoffed, "If you see two cats marry, it's not going to affect what's in your pocket."

She cautioned, "Don't let those issues distract you from your livlihood."

Dr. Peggy Wildman of AARP talkedabout the $10 million being spent by the "Swift Boat" PR firm to attack her organization. She said that SS will last unti 2042 or 2052. 13% of the paymens go to widows and children.

Congresswoman Johnson said that her point of view is not getting the media attention that the other side gets: "They have the upper hand when it comes to buying media!" She emphasized the Bush Administration's reputation for corrupting some jouirnalists and for intimidating others.

The underlying problem, Congresswoman Johnson reiterated, is, "This Administration cares nothing about poor people... they care about money."

She said that the Social Security trust fund exists just as any other government account exists, but that the actual money was being spent for other things. She particularly blamed the major tax cuts for wealthy people and "false wars."

She said, "This is not a new attack on Social Security. They have neverl liked it." Their scheme is to privatize part of the tax money, which would reduce the fund overally, and eventually bring it to its death. She said, "If you convince young people not to put in, it would kill SS."

One of the women asked if she expected more privatization of the Post Office. Johnson replied, "If it is up to this Administration, everything will be privatized!" In describing the tactics that right-wingers in government can be expected to use, she recalled the 2003 vote on a bill for prescription drugs under medicare. The discussion in Congress was deliberately scheduled to begin at midnight. The first vote was taken at 3 AM, but the Speaker of the House refused to accept it because the right-wing proposal had lost by 28 votes. Johnson described "galleries of black suited white men w with cell phones who hammered Congress into changing votes. The process took 3 hours. They voted again at 6 AM, and the bill passed by 1 vote. Later, Congresspersons found out that they had been lied to about the costs of the legislation.

Literature from the AARP was available. They are publishing their recommendations to improve the solvency of Social Security:

1. invest part of the Social Security surplus so that it earns higher returns. This would not be individual private accounts
2. Raise the "cap" from $90K to approximately $140K so that more people would pay Social Security
3. Include all newly hired state and local government workers under SS

Congresswoman Johnson impressed her audiences with her resolve to continue the fight against privatizing Social Security. She told the APWU women, "If you know you're right, you stand, even if you stand alone!" 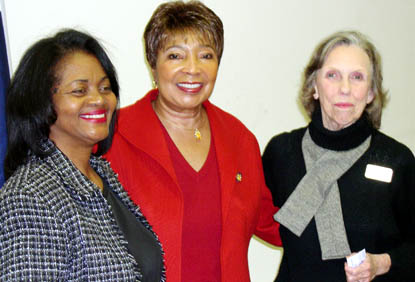