Turnout for Political Action is Astounding! 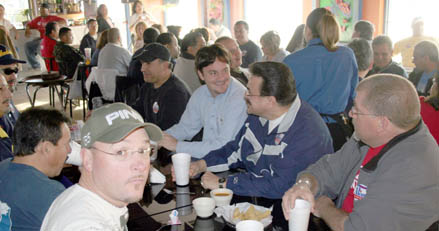 On February 9, State Representative Roberto Alonzo told a crowd at Morelia's Restaurant, 2705 Jefferson in Dallas, that his previous "block walking" effort had turned out a very satisfying number of volunteers, fifteen. He went on to say that he called his friend Bob Martinez of the Machinists' union to ask for volunters for today's effort. He then named several other union activists that he and Martinez had called, including:

Johnny Rodriguez of the United Food and Commercial Workers

Hobie Hukill of the American Federation of Teachers

Willy Gonzalez of UNITE-HERE, the Needletrades and Hotel/Restaurant Employees

The result, spread out before Alonzo, was a bulging restaurant full of volunteers, well over 60 people, ready to give up their Saturday for progressive politics!

Bob Martinez told the crowd, "Whoever it is that has challenged this young man [Alonzo], has made a great mistake!" He asked everybody to bring their friends for an even bigger effort at 9 AM on Saturday, February 23.

At 10 AM, everybody hit the streets in District 104. In carloads of 2, 3, or 4 activists, they knocked on doors and handed out campaign literature into the afternoon.

Even after that, politics continued to dominate the day. UAW Local 848 in Grand Prairie was the site of a political training session led by former Dallas Firefighter Ken Bailey. Longtime elections activist Katy Hubener told this reporter that the last such meeting brought 20 or 25 political activists, but over 100 had turned up that day! Asked the reason for the big turnout, she replied, "People are really angry about the way things have been going!"