Fight for Jobs Rages On

North Texas Jobs with Justice has fought against gobblelization (for fair trade, not free trade) since NAFTA was incubated. The latest battleground is the Steelworkers' strike against Goodyear in Tyler. An historical moment occurred just as our little Jobs with Justice delegation arrived December 23 with donated Christmas presents at the USW 746 union hall. President Jim Walmsley returned from the national negotiations while we were visiting.

He brought the news that a tentative agreement to end the 2 ½ month-old strike was pending. The press release was already out. It said that the main battle to save retiree benefits was basically won, but the main question facing the Tyler workers had not gone as well. Goodyear had only extended a one-year reprieve from their demand to shut down the plant. 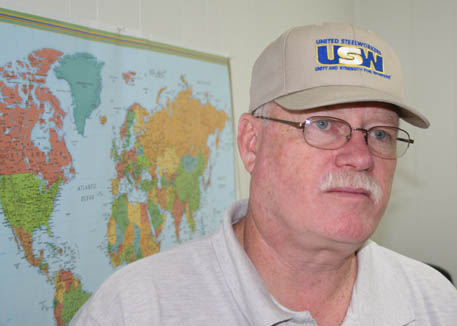 A weary President Jim Walmsley returned to Local 746L in Tyler on December 23. His local has battled for months against world-wide gobblelization

Would the proposal pass in the eleven striking U.S. union locals directly affected? The four Canadian Goodyear locals would have a different proposal, and ten of the U.S. plants were not looking at plant closure. Local 746 alone would have to vote on the proposal with job termination hanging over them. Would the Local's leadership recommend a "yes" vote, a "no" vote, or make no recommendation. The weary President Walmsley didn't know.

Over on the picket line, about 15 strikers and a supporter or two were gathered. They were concerned but not dismayed. They were pleased to see us, as they had appreciated the solidarity shown throughout the labor movement and, especially the people of Tyler who regularly visited with coffee and snacks. They explained the strike issues easily. It was a war, plain and simple. There were people with them on their side and people with management on the other side. The main issue was keeping jobs in America, because Goodyear had been increasing their investments in Asia even while they shut down operations here. Goodyear was carrying out a plan they chose as early as 1991, to move operations to places where lower wages and fewer pollution regulations prevailed.

These Steelworker men and women are proud of their union. Older picketers remembered winning strikes in 1973 and 1976. They remembered that their union local was talked about all over Texas as a model of union solidarity. Only a few members had scabbed. The Local had held strong through this ordeal and they weren't afraid of what would come next, even though they weren't sure what it might be.

"This agreement validates the solidarity of our members and their families, who wouldn't allow the company to walk away from obligations earned through a lifetime of hard work and loyalty," said USW President Leo W. Gerard.

"We owe a debt of gratitude," he added, "to the entire labor and activist communities, which rose with unprecedented solidarity to challenge Goodyear's assault on our members."

"By securing solid medical and drug benefits for current members and retirees in the midst of today's health care crisis," said Thomas Conway, USW Vice President and the Chair of the union's Goodyear negotiations, "our bargaining committee was able to drive the proverbial wolf away from the door for tens of thousands of retirees and thousands more workers who are nearing retirement."

The Tentative Agreement was endorsed by the USW's Goodyear Policy Committee, made up of local union leaders from the company's master contract facilities throughout the U.S. Members at these locations will vote at ratification meetings in their communities on December 28.

Although details of the tentative agreement will not be released until USW members at Goodyear have voted in a ratification election scheduled for next week, the union said that the agreement addresses three crucial areas of concern by:

* Establishing an innovative company-financed trust of more than $1 billion that will secure medical and prescription drug benefits for current and future retirees;

* Enhancing the ability of USW-represented plants to meet the challenges of global competition by having Goodyear triple its capital investments to at least $550 million in those plants; and,

In addition, the tentative agreement requires Goodyear to rescind its demand for immediate closure of its Tyler, Texas plant, and instead provides for a one-year period of transition during which workers will have the opportunity to take advantage of sizeable retirement buyouts.

The Tyler plant came out of the 2003 negotiation as the one unprotected facility, but despite determined efforts by international and local union leaders and strong support from the community, plant security could not be won beyond the end of 2007.

"Though we're not entirely happy with the outcome at Tyler," Conway said, "we were able to ensure that as long as Goodyear stays in the market for the tires built at Tyler, those tires will have to be produced at USW-represented plants in the U.S. The company simply won't be able to outsource that work or service this market segment with imports from China or anywhere other than a USW facility."

"What we achieved would never have been possible if we hadn't struck." said Ron Hoover, USW Executive Vice President

Negotiations between the USW and Goodyear began in June of this year. With a contract expiration date of July 22, 2006 approaching, a day-to-day extension agreement was reached that gave both parties the option of terminating the agreement upon delivering 72-hour notice. Lack of progress in bargaining talks forced the USW to delivered notice on October 2 and 15,000 USW members in 16 plants throughout North America struck on October 5.