The most important labor action in America today focuses on the Steelworkers' tire plant in Tyler, Texas. After a slow start, North Texans are beginning to find ways to treat the strike with the gravity it merits. On December 16, the USW international called for picketing at Goodyear tire retail centers across the nation. In our area, these messages were forwarded by the Texas AFL-CIO, the Texas Alliance for Retired Americans, Steelworkers Local 9479 (City of Dallas employees), and others. As "D16" approached, growing numbers of people began to commit. Contrast the earlier call for leafletting teams, when only four Jobs with Justice activists showed up at a Grand Prairie retail center.

At the Montford Rd plant, we had 16 participants on D16. USW 9479 brought several, but Communications Workers of America from locals 6215, 6733, and 6151 outnumbered the rest. Organizing Director Sandy Rusher, a long-time Jobs with Justice supporter, was on the line. Roy Robinson of the USW staff brought leaflets and signs.

The response from drivers was good, but the solidarity among the diverse union membership was even better. People were talking about other ways to participate in winning the strike, including fund-raising at union Christmas parties. Checks can be made out to "Local 746L Strike fund" and mailed to USW 746, 13624 Hiway 31 west, Tyler, TX 75709. 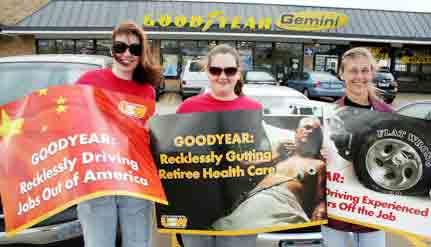