During the November elections, candidates with strong positions for Fair Trade (instead of "Free Trade" or gobblelization) tended to win, according to the AFL-CIO. The gobblelizers lost the November 7 election, and took an extra thumping on December 12 when Ciro Rodriguez beat Henry Bonilla in San Antonio.

What might not be so obvious, because it's only covered on the back pages and generally misrepresented, is that the gobblelizers also lost the Nicaraguan election on November 5, the Ecuadoran election on November 26, and the Venezuelan election on December 3. The clear trend in many newly-elected democratic governments in Latin America is toward electing popular governments that campaigned on the basis that they would reject corporate "free trade" investment pacts.

The Texas Fair Trade Watch group believes we can go on the offensive in 2007. Their first target will be to reverse "fast track" authorization that allows presidents to ramrod virtually secret international agreements through Congress. It has to be renewed next year, and people understand it a lot better than they did when it barely passed last time.

Immigrants within the United States, and their homeland populations also do not like gobblelization. It brings lower wages and benefits and more pollution in their countries, just as it does in ours. What happens in their home countries is misrepresented in the corporate-owned information sources here.

Along with hundreds of international observers, I went to Venezuela to check up on their December 3 election. I was already aware that the gobblelizers planned to claim "voter fraud," and that the U.S. corporate owned media would be happy to cooperate with them.

What I actually found was a scrupulously clean election and the most enthusiastic population of voters that I have ever imagined, and then some. People stood in line all night to vote! I didn't interview anyone who stood in line less than two hours, except for a disabled woman. Seniors and disabled Venezuelans get to go to the head of the line.

President Hugo Chavez Frias won an unprecedented fourth term on December 3. Turnout was an all-time high of 75%! As soon as we returned to the U.S., we found articles trying to explain away the obvious facts of the election. One of them, prominently featured in the Dallas Morning News, asserted that Chavez had somehow "kidnapped" all 25,000,000 Venezuelans! Another article said that everybody voted the opposite of what they really felt!

I took dozens of photos of people enthusiastically engaged in the political process. 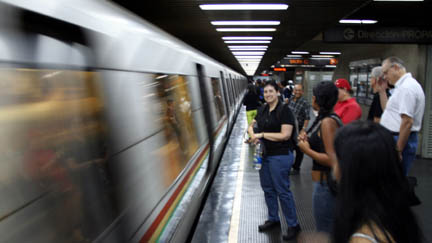 Whatever one may read in the corporate-owned media, the truth is that Venezuela is a modern nation with a highly-informed and literate population strongly engaged in a dramatically different political process.

I urge people to find out the truth. If they need an anti-gobblelization speaker with a lot of photos, please Contact me