Vote Early and Avoid the Rush

North Texas Jobs with Justice helped with a "Vote Now" rally on October 20, the first day of early voting. We gathered by the Records Building in downtown Dallas through the lunch period. Most of us had signs that said simply "vote." Among us were members of ACORN, Communications Workers ( a bunch ), Transport Workers, Office and Professional, Amalgamated Transit, and Teachers. Women far outnumbered men at the event.

We were urging people to vote early because the lines are just going to get much worse between now and November 4.

One TV channel covered the event. State Representative Roberto Alonzo was kind enough to join us. Recordings were made for KNON radio's "Workers Beat" program, Wednesdays 8-9 AM on 89.3 FM and www.knon.org. Newspapers reported record turnouts for the first day of early voting. Predictions have been made that Texas has never had so many voters! 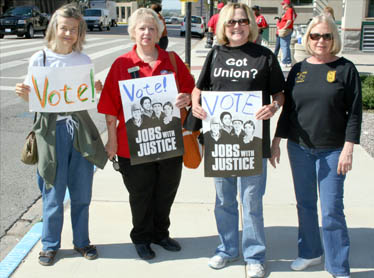 Meanwhile, unions continue contacting members to encourage them to Get Out The Vote (GOTV). The Dallas AFL-CIO and the Tarrant AFL-CIO are dispatching activists every Saturday. The United Auto Workers union is calling active members from their headquarters in Euless. JwJ founding member Jay Dunn is leading another effort to call all UAW retirees from the District Headquarters on Mockingbird in Dallas.

On October 20, two Ironworkers stopped by to help with the telephoning effort. Mike Martin (pictured while telephoning) asks for help with delegations to employers on behalf of low-paid construction workers. 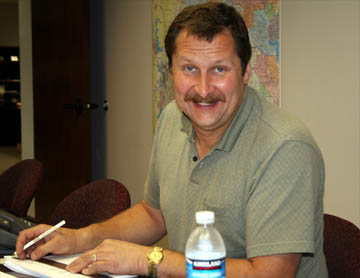 Mike Martin of the Ironworkers