Texans are Proud of Record-Setting Election 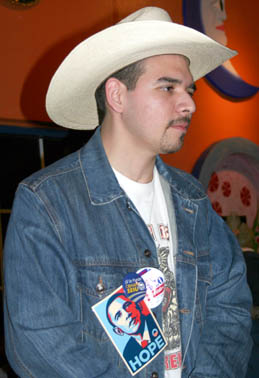 Roberto Alonzo, Jr, watched the election results at his father's victory party on the evening of March 4

Texans set records with over 2.8 million primary election voters. In a number of states where data was available, union households turned out up to 33% of the total vote. Texas does not get this information, but union people worked hard to get their endorsed candidates elected.

During the last two weeks of the Texas campaign, the "Change to Win Federation," which broke away from the AFL-CIO, endorsed Barack Obama for President. However, most unions had still not endorsed by March 4. Hillary Clinton won the popular vote, but was slightly edged by Obama because of the "pledged" delegates that result from the precinct conventions. There are enough "unpledged" delegates at the Democratic Party's State Convention, and a loose enough structure on the "pledged" delegates, to make the outcome of the Texas primary go either way.

Texas union leaders had gone through a process of scrutinizing the state and local candidates and endorsing some of them. Here, we can review the results:

The main race was the U.S. Senate. Union-endorsed Rick Noriega took 51% of the vote over two Democratic candidates and will not have to go through an expensive runoff election. he faces Republican John Cornyn this November. Texas AFL-CIO Communications Director says that most of the endorsed statewide candidates came through the election well, but four union-endorsed candidates for the state legislature went down. They are:
District 43 - Rep. Juan Escobar; District 77 - Rep. Paul Moreno, District 140 - Rep. Kevin Bailey. District 146 - Rep. Borris Miles

Listed below are the Dallas County candidates endorsed for the 2008 Primaries. All Dallas AFL-CIO candidates won outright except for Diana L. Lackey, who got the most votes but still has a runoff.