On August 23 at the Oak Cliff Methodist Church in Dallas, activists from Jobs with Justice joined with the UNITE-HERE union to investigate issues around health care reform. Univision television filmed part of the panel discussion and interviewed activists such as Willy Gonzalez of the union. 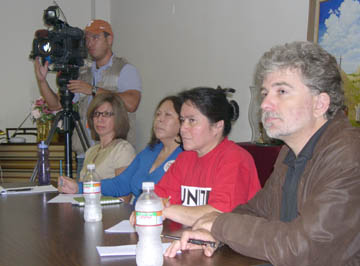 The panel heard testimony from a number of immigrants from the Americas and one from Africa. They talked about the hardships involved in the separation of families by present U.S. immigration laws, difficulties in obtaining citizenship, how hard it is to get an education, and how the present system creates general exploitation of workers on both sides of international borders.

Dr Rieger commented, "The policy of the powerful is always to divide and conquer." He and Dr DoCampo are working with Jobs with Justice to create an ongoing "Workers Rights Board" which can carry out investigations, make recommendations, and initiate activities for worker justice in our area.

The testimony and the summary comments by the panelists suggested union organizing as the best possible way to fight for a better situation for working people, citizens and new immigrants alike. Willy Gonzalez announced that there would be another activity in September, and that the union's commitment to comprehensive immigration reform will last until it achieves success. "This is a marathon, not a sprint," he added.